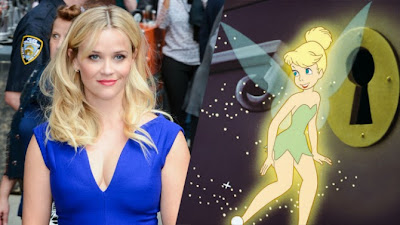 Disney has recently gone into a phase of remaking all of their classic animated films into live action movies. This year, we saw the release of Cinderella, and we know that movies like Beauty and the Beast and Mulan are on the way. While these film aren't necessarily my type of movie, they still interest me from the basic level of the acting talent involved, especially Beauty and the Beast, which may have one of the best casts I have seen before. And with this rush of live action Disney movies, we now know about another one on the way.

THR is reporting that a live action Tinkerbell movie, titled Tink, is being produced with Reese Witherspoon as the lead. It will be written by the upcoming Finding Dory screenwriter, Victoria Strouse. Like I said before, these movies aren't my type of thing, but I still think this sounds interesting. Witherspoon is an Academy Award nominated actress, so I think she adds something to this production. However, I think calling the movie "Tink" is stupid. They should have just called it "Tinkerbell". I also heard that this story will be a retelling of the Tinkerbell character in a different light, like what Disney did with Maleficent. That makes me nervous, because I thought Maleficent was an awful, horrendous movie. Hopefully they don't do Tink exactly like Maleficent but rather tell a new story, like what that movie did.

What do you think? Does Tink sound interesting to you? Do you like Reese Witherspoon in the role? Leave your thoughts in the comments section below.