Top 5 Favorite Moments From: The Avengers

This is the fourth installment of this new series where I basically take a movie and pick my personal five favorite scenes from that movie. Then, you can go into the comments and say why you either agree or disagree with me. With the release of Avengers: Age of Ultron this month (read our review here), the movie I am doing is The Avengers. Warning- there are spoilers!

(Make sure to check out our other "Top 5 Favorite Moments From" for The Dark Knight Rises, The Matrix and Rise of the Planet of the Apes- all right here) 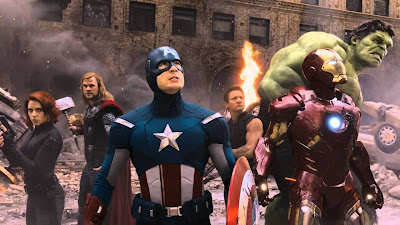 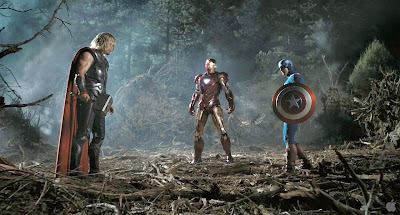 After Thor (Chris Hemsworth) steals the S.H.I.E.L.D.'s prisoner Loki (Tom Hiddelston), Iron Man (Robert Downey Jr.) decides to show Thor's who's boss, and pretty much has his ass handed to him. It is truly god versus the machine in this scene, where Thor and Iron Man fight in the woods, with and endless amount of commentary by the latter. "Does mother know you weareth her drapes?" and "Shakespeare in the park" being some of the best lines from this scene. The action is also really cool, as trees are obliterated by repulsor rays and lightning. This scene really shows just how dysfunctional the team is before having to unite against the alien invasion. It shows that there's a real battle of egos in the team (mainly from Iron Man) and just how hard it's going to be for them to work together. The Thor and Iron Man fight is ultimately broken up by Captain America (Chris Evans), who should not have asked Thor to put the hammer down. "You want me to put the hammer down?!" Thor yells and he smashes his hammer on Cap's shield, wiping out the forest. The scene is a true testament as to the damage that these superpowered beings can inflict on the world... which will be dealt with in next years Captain America: Civil War. Overall, this is just a really fun scene to watch for all of the action and the humor is spot on.

(I didn't know I could upload GIFs, prepare for a barrage of them)

Technically, this "Hulk Smash" scene starts when Cap tells the Hulk (Mark Ruffalo) literally "Hulk, smash." That scene of the Hulk jumping into the air and destroying the Chitauri is incredible (no pun intended). But you have to love the scene where Loki encounters the Hulk. The Hulk is about to attack when Loki yells "Stop, I am a god you foul creature! I will, not be bullied by..." and then the Hulk proceeds to grab him and... well, smash, as shown above. This scene received the most cheers and clapping from the theater audience when I saw it. So much so that I didn't even hear what the Hulk says after smashing Loki, which is priceless. The Hulk walks away and says "Puny god". This is just one of those scenes that immediately comes to mind when you think of The Avengers. It just was set up so perfectly by writer/director Joss Whedon and is just a great scene altogether. 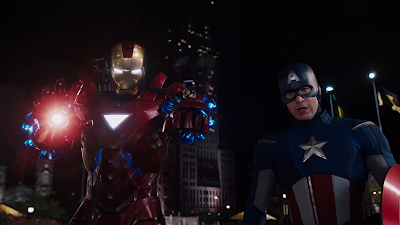 S.H.I.E.L.D. has found Loki in Germany, not exactly hiding. Loki captures a group of Germans and begins a very important and special speech about the nature of man and authority. That we "crave subjugation". I have always liked this speech, because it introduces a deeper level into a blockbuster movie. It takes a moment away from the action and special effects to give us Shakespearean philosophy, which I have always appreciated. Then Cap shows up to kick his ass. Loki and Cap fight, but this scene isn't truly made until Iron Man shows up. The Quinjet is highjacked and the speakers come on, blasting AC/DC's "Shoot to Thrill". Iron Man drops in, takes down Loki and says "You're move, Reindeer Games". If that's not a badass entrance, I don't know what it is. I was smiling like a maniac when I saw that for the first time, because that is exactly something Iron Man would do. That is a fantastic scene. 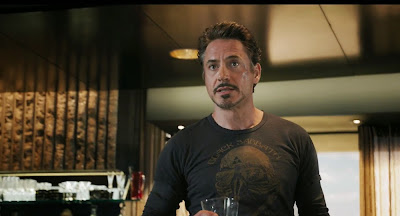 What do you normally do right before an alien invasion? Have a debate with your enemy about who is going to win. Sounds kind of cheesy in principle, but it is awesome in the film. As everyone is on the brink of battle, Loki and Tony have a conversation. Loki explains that the Chitauri will destroy the Earth and he will be king. But Tony offers a rebuttal, stating that the Avengers will stop him. "I have an army!" Loki states. "We have a Hulk" Tony responds. A lot of people don't like the first two-thirds of this movie and only like the Battle, but I think the Battle is so much more meaningful because the first two-thirds was set up. This scene is the turning point when it really goes from set up to war. The dialogue in this scene is witty and quick, and it's great to see two such opposing, egomaniac personalities like Tony Stark and Loki going head to head.

Widow Kicks Ass: Black Widow (Scarlett Johansson) is seemingly held hostage, but then takes down her interrogators, revealing she was controlling the situation the whole time. Big Man in a Suit of Armor: The whole team is arguing with each other, but it's really Cap versus Tony at this point. "Big man in a suit of armor. Take that away, what are you?" Cap asks. "Genius, billionaire, playboy philanthropist." Tony responds. RIP Phil (But Not Really): Loki tricks Phil Coulson (Clark Gregg) and impales him with his scepter. While it was necessary to give the team something to avenge, what was not necessary was bring Coulson back from the dead for his own (terrible) TV show, Agents of S.H.I.E.L.D. Back to back to back to back to... you get it.: Standing in the middle of New York, all the Avengers stand together as the camera goes around in a circle, showing them all. It's pictured at the beginning of the article. 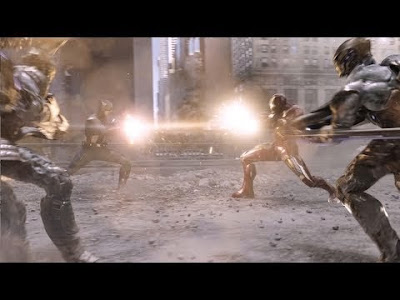 In one, epic moment, the camera tracks all of the Avengers all over New York, collectively (and some of them working together) fighting the Chitauri. This is my favorite scene of the movie because it is just such a perfectly choreographed shot. It really shows the teamwork element of the Avengers and is just a great scene. I was hoping for a scene like this in Avengers: Age of Ultron and to my surprise, the movie opened with one.

So there you are; those are my top 5 favorite moments from The Avengers.

What do you think? Do you agree with my list? Do you disagree? Did you like The Avengers? Have you seen Avengers: Age of Ultron yet? Leave your thoughts in the comments section below.