First Trailer for Bridge of Spies

Take one of the best actors working today and pair him up with one of the best directors working today, and make the film a Cold War thriller, and what do you get? The Academy sh*ting their pants, that's what you get. The first trailer for Bridge of Spies has been released, starring Tom Hanks and directed by Steven Spielberg. I wasn't using hyperbole when I said they were some of the best talent working in the industry today. They truly are, and I have been eagerly awaiting their next film collaboration, which has been under the radar for a while, until now.

The film tells the story of James Donovan, who was recruited by the CIA to rescue a pilot being incarcerated by the Soviet Union. During this venture, Donovan's family is subject to public scrutiny, as American citizens disagree with some of the Donovan's decisions on the government's behalf. It seems like what this film will boil down to is what does it really mean to be American, or a member of any society or country. Spielberg is a master and this trailer looks beautiful. Hanks gives a great performance from what we've seen. I have a hard time believing that this movie won't be a heavy contender for the Academy Awards by the end of the year. 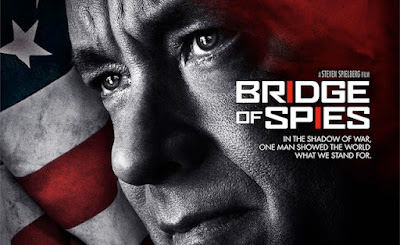