First Trailer for The Martian

The Martian is the latest film from director Ridley Scott, who hasn't had a lot of success lately. Between films like Robin Hood, The Counselor and Exodus: Gods and Kings, Scott has lost a lot of people's faith. Now, it seems like he may have earned it back. I've been interested in The Martian from the very beginning. The cast looks incredible, and it has a very interesting sounding plot. It wasn't too long ago that the first images for the movie came out (which you can see here), and I thought they looked great. And now we have our first trailer.

I really liked this trailer. From the point of view of the production design, it looks breathtaking. From the design of Mars to the space shuttles and suits... it's visually spectacular. The trailer also gave us some insight into the story of Matt Damon's character trying to survive on Mars while the rescue team tries to retrieve him. A lot of people have claimed it is overly "spoiler-ific", but it didn't bother me. There really wasn't much in this trailer that I hadn't suspected myself. So overall, I am really looking forward to this movie and I hope this is Ridley Scott back on his A-game. 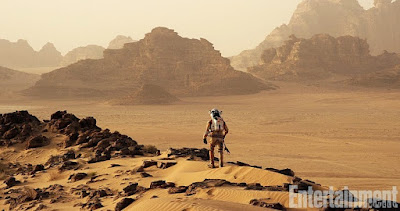 What do you think? Did you like the trailer for The Martian? Are you looking forward to the film? Leave your thoughts in the comments section below.