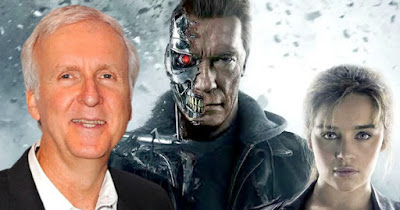 One movie that I'm crossing my fingers and hoping it's good is Terminator: Genisys. So far, I have rather liked the trailers. I am a big fan of the original two films and I have high hopes that this fifth installment will bring the franchise back to greatness. It has everything going for it; with a great cast, including the original Hasta-la-vista-baby-ing time traveling killer himself, Arnold Schwarzenegger. Yep, he's back. (Sorry, it had to be done). But a lot of people have had their own problems and worries about the film. I don't have specific worries about it-- I just hope it's good.

But an assurance we now have is that James Cameron, who created the franchise and directed The Terminator and Terminator 2: Judgment Day, is praising the film and fully endorsing it. In a recent interview, Cameron said:

"I had no idea what to expect sitting down. I wasn't involved in the making of the film. I didn't direct it. I didn't write it. I'm just a fanboy. I'm in a dark theater. The movie starts, and I start to see things I recognize. It's been very respectful of the first two films. Then all of a sudden, it just swerves, and now I'm going on a journey."

"I feel like the franchise has been reinvigorated, like this is a renaissance. You look at why the films became classics. They had characters that you like. In the new film-- which in my mind I think of as the third film-- we see Arnold take the character even farther..." 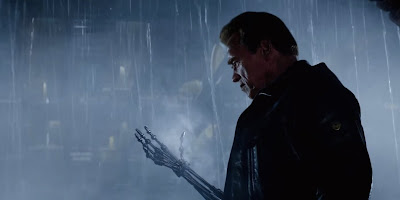 Cameron then went on to talk about some spoilers in the film, which have been online and shown in the trailers. But I edited them out to preserve anyone's innocence who didn't know. You can either look at this optimistically or pessimistically. From the latter point-of-view, what else could Cameron say? This is his franchise and if he just starts trashing on this movie a month before its release, a lot of people will be angry with him. But I'm choosing the former, because I don't think Cameron would say the certain things that he said if he didn't mean them. I'm going to be hopeful that he means this, and that he really liked this movie. Because if he does, it makes any fanboy's rants about it not being "faithful" irrelevant, since it is supported by the creator of Terminator himself. I really hope this movie is good, and Cameron gave me a little bit more to make me excited.

What do you think? Did you like James Cameron's comments? Are you looking forward to Terminator: Genisys? Leave your thoughts in the comments section below.