Tom Hardy is probably one of the most interesting actors working today. He has compiled a fantastic resume-- from playing Eames the Forger in Inception to being the only person in the whole movie in Locke, Hardy constantly tries to top himself with every new movie he does. Now, he's doing it again. In his latest film, Legend, Hardy plays twin mobsters, the Kray Brothers, as they take over London's underground in the 1950's. We've seen actors play multiple characters on screen before, but this is something that I am really excited for. Hardy is one of my favorite actors working today, and to see him attempt this feat will be incredible to watch.

I have always liked gangster movies. When done right, they can be fresh, violent and entertaining. When done wrong, they can be boring as hell. From the trailer, Legend looks to be the former-- stylistic, artistic and fun. I am really looking forward to seeing that fight between the Kray Brothers. I have a lot of hopes for this movie. Sure, not many people liked Hardy's last film Child 44, but I have a good feeling about this movie. I think it could give us two fantastic performances from Tom Hardy and a really cool mobster movie. I guess the question now is... which role does Hardy get an Academy Award nomination for? 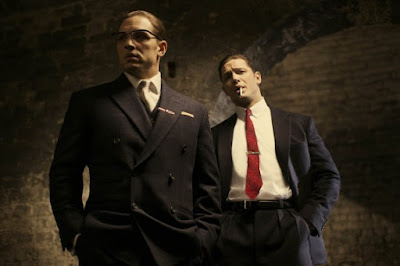 What do you think? Did you like the trailer for Legend? Are you looking forward to the film? Leave your thoughts in the comments section below.