...this trailer is awesome. It really confirmed for me that this is still a Captain America movie, and not some bloated mess. The trailer itself is very Cap-centered, while branching off the other Avengers as supporting characters. Robert Downey Jr. was great in this trailer, and he didn't once overpower Cap. It is very clear that Cap will be the focus, as it should be. The style of returning directors Anthony and Joe Russo is very apparent in this trailer. It shows in the humor, the atmosphere and the action. The last fight between the Winter Soldier, Captain America and Iron Man was especially fantastic. It was perfectly choreographed. What was so great about Captain America: The Winter Soldier was how well choreographed the action was. It didn't use shaky cam and rapid editing, as many modern-day action films do nowadays, but it allowed for wide shots and long takes. And it looks like this style will be returning in this film. I also know that the people at D-23 got to see Paul Rudd at the very end of their trailer, so I really would have liked to have seen that after the main title in this trailer, but there's always next time. Overall, I am really excited for this film. This is a great trailer, and I can't wait to see it on the big screen the next time I go to the movies. 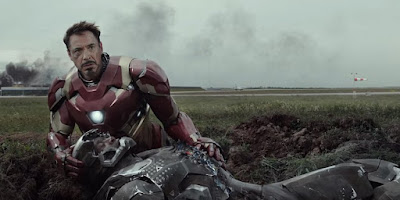 What do you think? Did you like this trailer for Captain America: Civil War? Are you looking forward to seeing the film? Leave your thoughts in the comments section below.