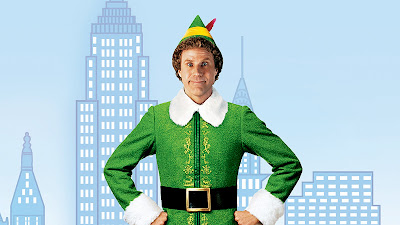 As we come closer to the holidays, we all tend to watch Christmas movies. It's just something we do. So I thought I'd review some classic Christmas movies over the course of the next couple weeks. Keep in mind, this will contain spoilers for the movie, so please be cautious. These reviews are for people who have already seen the movies, so keep that in mind. So, let's get started with these Christmas Classic Reviews.

This review is for Elf. Remember, there are spoilers for the film. 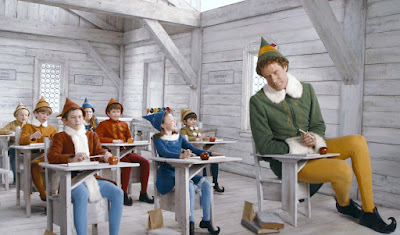 Elf tells the story of Buddy (Will Ferrell), a human adopted by elves who sets out on a quest to find his father, a man on the "naughty" list. Buddy travels to New York City to find his father, and tries to bring back the Christmas spirit that's all but lost. I hadn't seen Elf before, so I thought I'd check it out. It's an incredibly stupid movie, but it's the good kind of stupid. It's enjoyable and entertaining. It's ridiculous and absurd, but it's fun to watch.

Ferrell really carries this movie, and carries it well. If it wasn't for his charisma and energy, this movie would have been unbearable. He brings such a levity to the movie that you can't help but laugh at him. This film really suited his comedic abilities well, and I really can't name who else could have done this role. He just fit this movie and this character so perfectly. The supporting cast is also really good. Zooey Deschanel is good as Jovie, along with James Caan as Walter and Edward Ashner as Santa. Peter Dinklage has a great cameo as a respectable author Miles Finch. 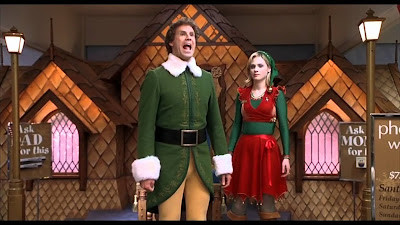 This movie, however, is incredibly stupid. It's a very stupid movie in its humor, style and ridiculousness. But like I said before, Ferrell is what makes it enjoyable. But even if its the good kind of stupid, it consumes the movie at some points. The third act in Central Park just got to the point where it was so overly absurd that I lost interest in the film. This movie was at its best when it was Buddy, a sheltered el, interacting with the real world. That kind of physical humor and improv from Ferrell was genius. But when the movie strayed from that, that's when the weaknesses began to show.

Elf also reached to pull at our heartstrings, but misses. I'm invested in Buddy, but I don't really care about Jovie or Walter or any of the other supporting characters. This film tried very hard to have emotions and to be a heart-felt movie, but like I said before: it misses the mark. Jon Favreau does a great job directing Ferrell in the comedy, but he (at the time this movie came out) didn't have the directorial strength to have this film come full-circle. He accomplishes this perfectly eleven years later with Chef, but in 2003 with Elf, Favreau just doesn't have the experience and expertise yet. 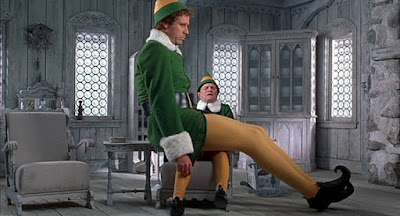 Overall, Elf is stupid fun comedy. Ferrell shines as an over-the-top, ridiculous elf interacting with the real world. When the movie focuses on this aspect, it's great. As soon as it tries to branch off and become a more heart-felt, meaningful film, the movie's weaknesses begin to show. The supporting cast give good performances, but the movie fails in making me invested in them. The only person who I really care about is Buddy. If your looking for a fantastic Christmas movie, Elf may not be for you. But if you just want to leave your brain at the door for an hour and a half, definitiely check Elf out.

What do you think? Have you seen Elf? Do you like it? What other Christmas movies should I review? Leave your thoughts in the comments section below.