My Problems With- The Hobbit: The Battle of the Five Armies (EXTENDED EDITION) 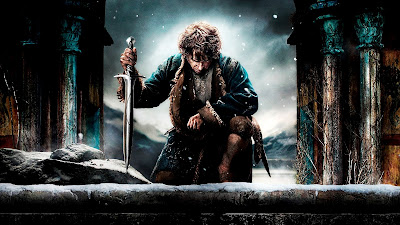 In this editorial series, I take a film that has some controversy to it. Some people like it, some people don't and I look at it. I will break down my problems with the film. It should be noted that these will be movies that, overall, I did like but I have problems with it. I won't do movies that I hated entirely, because those articles would be way to long to express all my problems! It should also be noted that these articles will be loaded with SPOILERS for the movie, so read with discretion. So, with that said, let's get started.

I will be discussing my problems with The Hobbit: The Battle of the Five Armies, and this will be for the newly released Extended Edition. Remember, there will be SPOILERS! Watch out! 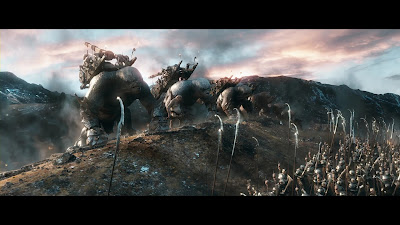 While there are many things that I like about The Hobbit Trilogy, there are also many things that I don't like, and the abundance and overuse of CGI is one of them. The past two movies in the trilogy relied too much on CGI, but The Battle of the Five Armies is the worst culprit. While the action on screen may be cool, it feels like I'm watching a video game cut scene, because none of it feels real. The problem is not the CGI itself. I am all for CGI when it is used properly. I cheer on motion-capture, and I praise films for clever use of animation. But when a film relies on CGI too much, and uses it when it is unnecessarily, that is when I have a problem.

The Orcs were terrifying in The Lord of the Rings because they were make-up and costumes. The Orcs in this film don't nearly have that same feel, because they are all digital. The landscape and battle grounds don't feel real because it is all green screen. Most of the weapons and architecture were all digitally created, so there were no real stakes. If sets were built and CGI was used to enhance it, then it would feel real because at least you have a tangible basis. But if it's all CGI, then it's hard to become invested in it. Instead of watching a film, I was watching a video game.

#2 The Death of Smaug 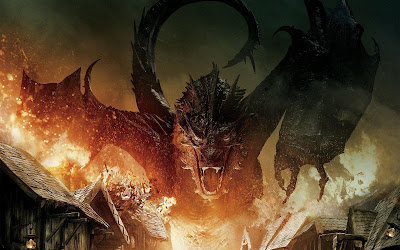 When The Hobbit: The Desolation of Smaug ended in 2013 with Smaug flying toward Lake-Town, and Bilbo Baggins (Martin Freeman) utters "What have we done?", I said it was a fantastic cliff-hanger ending. And I still stand by that. But when The Battle of the Five Armies opens to the destruction of Lake-Town and Bard (Luke Evans) slaying of the dragon, it doesn't have the emotional stakes it should have. That is because Smaug should have died at the very end of The Desolation of Smaug. Look, that film was our introduction to Smaug. With the conversation between Bilbo and Smaug, we become attached to the character and are legitimately terrified when he says he will burn Lake-Town. The death of Smaug would have felt more complete and satisfying if Smaug had died at the very end of his own movie, rather than quickly before the main title in The Battle of the Five Armies.

If they had taken out the Lonely Mountain hide-and-seek game with the Dwarves running from Smaug (which if you can't tell by the sarcasm, I hated), and reduced to destruction of Lake-Town a little bit, then it could have fit in. Then you could have opened The Battle of Five Armies with a slow burn, showing the decay of Thorin's (Richard Armitage) mental state, and a rising tension. That is how Smaug's death should have been handled, and how the beginning would have been improved.

#3 It Was an Unnecessary Movie

A lot of people groaned when the news broke that The Hobbit was splitting from two films to three. Many people said it was simply a "cash-grab", and it certainly earned them a lot of money. But when you watch all three movies, you can clearly see that it should have been two films. The pace of the trilogy is entirely screwed up by this third film. From the beginning of An Unexpected Journey to The Desolation of Smaug, over a year passes. Only a few days pass in The Battle of the Five Armies. While the battle itself is cool to watch, it consumes the film, and does not need to be nearly as big or as long as it is. There are many unnecessary parts of this film and the other two that could have been reduced or cut or saved simply for the extended editions that would have made this two films. The Battle of the Five Armies also does not operate as its own singular movie. It does not have its own beginning, middle and end, but is rather The Desolation of Smaug Part Two.

And a separate comment: the extended edition of The Battle of the Five Armies was rated R, and it definitely shows in several bloody and gory scenes. While they were cool to watch, it felt weird because it stood out. The rest of the series has been PG-13, with PG-13 violence, and for the film to suddenly just turn into a gore-fest was kind of awkward. The action itself was good, but it didn't feel right for this franchise, as it was such an abrupt and drastic change. 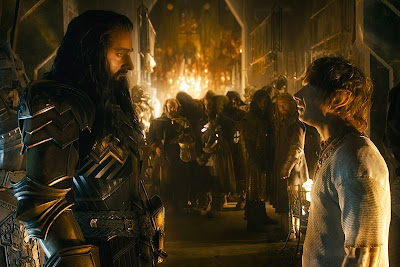 There were many good things about this movie too. While I had problems with the CGI side, the action itself was really cool to watch. Peter Jackson definitely knows how to direct large scale battles. The acting is also really good in this film, especially from Armitage and Freeman. Martin Freeman has been a solid rock in this franchise, and you know that despite a lot of problems he will always turn in a marvelous performance, and he does that here. Thorin's character may take an abrupt turn into a gold-crazed tyrant, but Armitage's performance is fantastic. Ian McKellen is also great as Gandalf the Grey, but he's always great.

The Battle of Dol Guldur was also great, seeing Elrond (Hugo Weaving), Saruman (the late Christopher Lee) and Galadriel (Cate Blanchett) fight the Ringwraiths. It was a great scene, that was expanded upon and improved in the extended edition. Yes, it may be more fighting in a movie with so much fighting already, but it's a powerful and important scene not just for this trilogy, but for The Lord of the Rings as well.

So, in the end, there are a lot of good things and a lot of bad things about The Hobbit: The Battle of the Five Armies. It suffers from an overabundance of CGI, mishandling the death of Smaug and being an unnecessary film, but it succeeds in providing cool action, good performances and a great battle in Dol Guldur. While this film doesn't have nearly the same punch as the final act of The Lord of the Rings, it does wrap up The Hobbit Trilogy fairly well and concludes a beloved franchise. 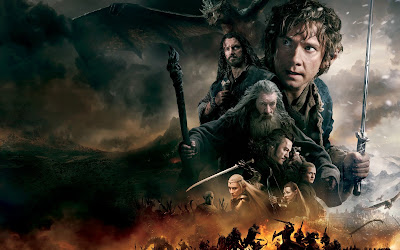 What do you think? Do you agree with my problems with The Hobbit: The Battle of the Five Armies? What are some of your problems with the film? What do you like about it? Leave your thoughts in the comments section below.