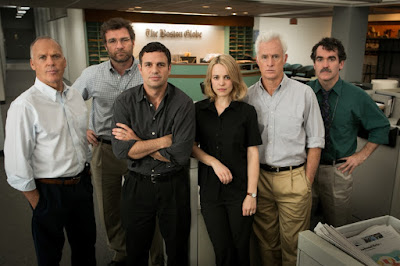 There have been a few movies based in Boston this year, and these movies seem to hit me on a different level, considering I am from the Boston area. So I knew that Spotlight, a film focusing on the Boston Globe, would strike me a certain way when I saw it. Of course, the first thing I do when I watch a movie based in Boston is I make sure everyone's accents sound authentic. And I can report that this movie accomplishes that. But I was really excited to see Spotlight. I had heard excellent things about it, and it looked as if it could be one of the top Oscar contenders of the year. So I walked into the theater with high expectations, and I can say that Spotlight (mostly) delivered.

Spotlight focuses on the Boston Globe in the 1990s, whose "Spotlight" team was working against the clock in order to uncover and publish the story on dozens of Boston priests molesting children over the course of decades. While working to break this story, the team also struggles with their own morals, and whether they should or should not publish this revolutionary story. 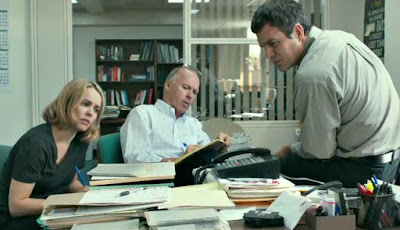 I thoroughly enjoyed Spotlight. It was a very compelling movie, that kept you engaged throughout the film. I found myself more and more fascinated with the story with every new development and twist. The film managed to find a mystery thriller within a biographical film, which makes this compelling to watch. I give a lot of credit to director Tom McCarthy, who turned in a masterful film. It's hard to believe that this is the same guy who directed The Cobbler. This is a great ensemble film, with fantastic performances all around from Michael Keaton, John Slattery, Rachel McAdams and Liev Schrieber, but Mark Ruffalo was especially good, turning in what could be an Oscar contending performance.

This movie had really strong themes of morality and ethics. I studied journalism in school, so I saw a lot of ideas such as journalistic integrity play out on screen. What this movie really asked was, how much has to happen before something becomes bigger than your profession? There were many people, lawyers especially, whose job prevented them from revealing information. But this movie saw them realize that this event was bigger than their job or their career, as people's lives were at stake. It also saw the lengths people will go to in order to keep the status quo. There would be countless people who told the journalists to stop digging around, because revealing this to the world would disrupt things. This film was a real eye-opener into the world of journalism, and just into the world in general. 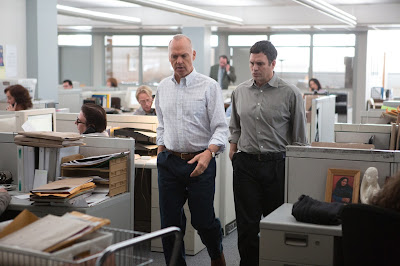 While this was a really great movie, I did have some problems with it. There were times where it dragged a bit, especially in the beginning when they were introducing the case. It took a little bit to get into the film, but when I did get into it, I was locked in. The movie also could have been tightened up a bit in order to make it flow a little better. Like I said before, I really enjoyed this film, but it could been trimmed at parts in order to make it a leaner film. However, one more thing I think it did right was that it was explicit in saying that the issue wasn't the religion, but rather the system of the church. This was especially important, as it never felt disrespectful. Rather, it pointed out the faults in a system rather than a belief.

Overall, I really enjoyed Spotlight. It was a very compelling movie, with an engaging plot and fascinating mystery thriller. It was great performances all around, but Mark Ruffalo especially stood out from the ensemble. The direction by Tom McCarthy was excellent, despite his previous directorial credits. This film explored very interesting themes of morality and ethics, and was also respectful of the religion of Christianity while pointing out issues in the institution of the church. However, the movie did drag at parts and could have been tightened up a bit. But in the end, Spotlight was a very engaging and interesting movie to watch. 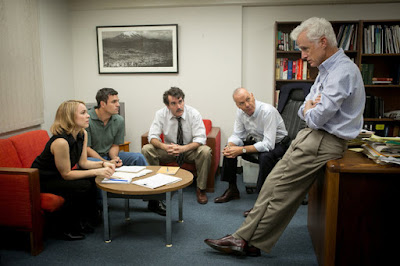 What do you think? Have you seen Spotlight? Did you like it? Leave your (spoiler-free) thoughts in the comments section below.