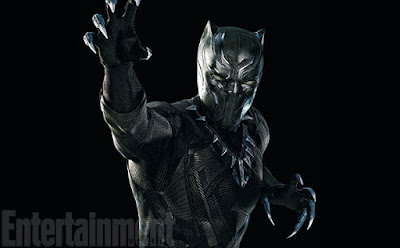 We have known for a while that Chadwick Boseman will be playing Black Panther, not just in his stand-alone movie due in 2018, but also in next year's Captain America: Civil War. In the trailer that just dropped for the film (which you can see here), we saw several shots of the Wakandan king, but now we have a better look. In the latest issue of Entertainment Weekly, Civil War is featured prominently, as well as Black Panther. The costume looks absolutely fantastic. We had seen concept art before, but seeing it as a real and tangible suit... it looks awesome. I don't think we could have asked for a better costume. Some people are complaining that he doesn't have his classic cape, but I think it would have looked kind of stupid and impractical for an acrobatic warrior. This is a great costume, and I'm really excited to see Boseman in Civil War. 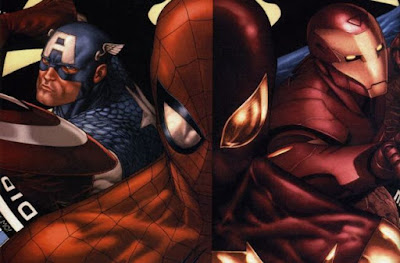 Speaking of Civil War, one thing we haven't seen yet from the film is the look of Tom Holland as Spider-Man. Ever since the deal between Sony and Marvel became finalized, it's been heavily speculated that the Webslinger would appear in Civil War, though it has never been officially confirmed. But, I mean, I would die over in shock if he wasn't. But now we have conformation that he will in fact appear in the film. Like I said, we all assumed this. There was no doubt in my mind that he would be in the movie. The question is how much of an appearance he will have. A new report is saying Spidey will be involved in one of the big fight scenes, which doesn't surprise me either. Regardless of what he does, I am very excited to see Spider-Man in Civil War. 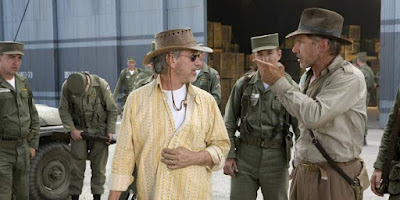 Ever since the latest outing from Steven Spielberg and Harrison Ford, Indiana Jones and the Kingdom of the Crystal Skull, there has been a lot of speculation as to who will take over the mantle as Indy. There have been countless rumors, ranging from Chris Pratt to Bradley Cooper. Despite both Spielberg and Ford's interest in returning for a fifth installment, rumors of a reboot have persisted, until now. Spielberg, who has directed and produced the franchise, has come out and said that Ford will not be replaced as Indiana Jones. To some this may be good news, but I don't like it. If Spielberg is so intent on not replacing Ford, then that means we won't see any new Indiana Jones movies until they are all dead. They'll probably do a fifth one with Ford, but after that Ford loses his ability to be a convincing Indiana Jones. And if they don't recast him, then it won't be until Spielberg and Ford have passed that we could see more Indiana Jones movies.

Everything Wrong With Star Wars Episode VII:
A New Hope, courtesy of CinemaSins