First Trailer for The Magnificent Seven

With every new remake and reboot of a Hollywood classic, there are always the people who gripe and complain. "Stop remaking the classics!" They scream into their computer monitors. I've never understood this mentality. It's a movie. Granted, many of these remade classics like Ben-Hur and The Magnificent Seven I haven't seen, so that may be a component of it. But even films that are close and dear to my heart I wouldn't have a problem if they remade it. Because nothing changes about the original. It simply is taking the film that you love and re-branding it for an audience who has never seen it. So now that I got that mini-rant out of the way, let's talk about the first trailer for the remake of the Hollywood classic, The Magnificent Seven!

I had no expectations going into it, and the trailer blew me away. Antoine Fuqua's directing style captured the trailer and really commanded it. Stylistically it was breathtaking, and had a great tone. Denzel Washington and Chris Pratt sold this trailer, adding the coolness and badass factors. The action looks great. The visuals were thrilling. The music set the mood for the trailer. Usually when the footage is edited to fit beats in the song, I don't care for it. But with this trailer it works. It enhances the tone of the trailer. There isn't really anything bad about this trailer. It's everything that it should be: a heart-pounding, Western thriller. The Magnificent Seven went from not being on my radar whatsoever to being highly anticipated now. This has the potential to be one of the great remakes in Hollywood, and after seeing this trailer I have faith that it can be that. I just hope Fuqua delivered with this film! 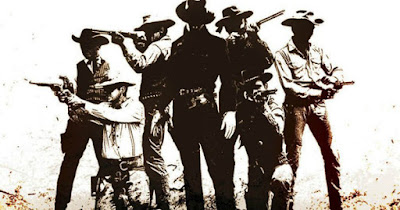 What do you think? Did you like the trailer for The Magnificent Seven? Are you looking forward to seeing the film? Leave your thoughts in the comments section below.