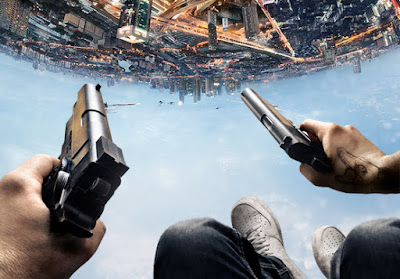 So far, we have yet to have a good video game adaptation movie. So why not just screw trying to adapt one, and make a movie that's a video game itself? That sounds confusing, until you see the marketing for Hardcore Henry, a first-person action film from first time director Ilya Naishuller. The film spawned from music video for the band Biting Elbows' song "Bad Motherf*cker" Naishuller directed, which you can watch here. After doing this music video, Naishuller was given the job of adapting the idea into a feature length film. So I was very excited sitting down to watch Hardcore Henry. I was excited to see what was really an experimental film. Could a first person action film actually work? Or would it just come off as gimmicky. Hardcore Henry excels at delievering heart-pounding action, but misses out on delivering character development or a half-way decent story.

The film opens with Henry waking up. He had been in some sort of accident, where parts of his body were replaced with cybernetic machinery. This gives him superhuman abilities. The woman who greets him, Estelle (Hayley Bennett), says that she is his wife, and is soon kidnapped by an evil organization run by the supernaturally powerful Akan (Danila Kozlovsky). Henry must then team up with the mysterious Jimmy (Sharlto Copley) in order to get her back, and brutally killing hundreds of people along the way. 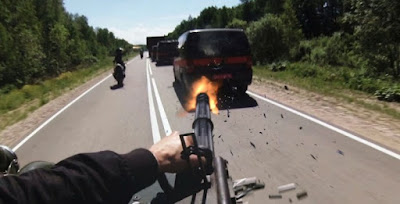 Let's start with the positives. The action is incredible. Naishuller choreographs these incredible stunts, that allow the audience to put themselves into the character of Henry, and live these great action scenes through his eyes. I'm not sure how they pulled off half the stunts they did in this film. The action is brutal and it is very, very gory. It was one of those action films that was so gory that it was enjoyable to watch, and that was what this film was. I was sucked into the action, wincing with every blow and kill. And it wasn't just shooting guns. There was intricate fist fights that made this an incredibly cool movie to watch. For a first time director, with a low budget, doing an experimental film that involved first person action, they pulled it off incredibly.

My only true positives are the action, so it's a good thing that it takes up 75% of the film. I have problems with everything else about the movie. The story is just stupid. You didn't need an overly complicated story. Someone takes Henry's wife and he has to get her back. But the film makes several attempts to further develop the story by adding new layers and twists, that ultimately just don't make sense and are stupid. Akan somehow has magical superpowers, but the film takes no time to address how there are superpowers in this seemingly realistic interpretation of our world. The only character who is truly fleshed out is Jimmy, and it actually works for understanding his motivation. But then that all goes to sh*t when the character dramatically changes his mind three times in the period of like eight minutes. There is just some very sloppy Writing 101 mistakes in this film. The story is over-complicated when it doesn't have to be, with attempts to broaden a wider mythology that ultimately doesn't serve a purpose. 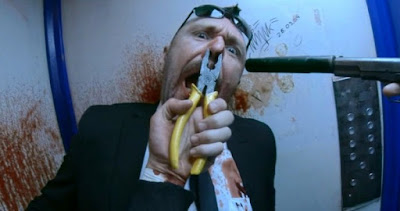 The character motivations are all unclear. We understand Henry is trying to get his wife back, but he doesn't have any memory of who he is, or who she is. So there is no emotional stake for him to want to get her back. There is no clear reason why Akan is doing anything that he is doing (other than just to gain power). Jimmy's motivations are understandable, but he makes too many quick, unrealistic decisions that just don't make sense. Plus he has a dancing scene that has no relevance to the film. It was the biggest "WTF" moment in the movie. Here's how they could have solved the story issues: don't try to have an incricate story. Keep it at a simple revenge story. Allow for Henry to remember parts of his past so that he has an actual reason to rescue his wife. Do away with the bullsh*t twists and the villain, because Akan was just laughably ridiculous. This is an action film, and everything else is distraction. If they simply kept the focus on what this movie truly was, then it would have been a much more enjoyable movie.

Overall, Hardcore Henry is a joyride when in the midst of its action sequences. But as soon as those are over and the film tries to develop its story, it suffers from poor writing, complicated twists and unclear character motivations. For an experimental film, Ilya Naishuller does a magnificent job with first person action. For a first time director venturing into an unknown field with a low budget, what he accomplishes is incredible. This film can be held as the first step in perfecting first person action, and someone can come along and build upon what Naishuller created. This would be a fantastic film if the story had been drastically changed, editing out a lot of things that didn't make sense and allowed the movie to focus solely on what the audience came to see... the action. 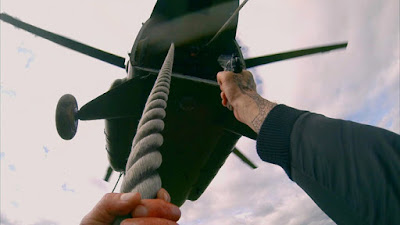 What do you think? Have you seen Hardcore Henry? Did you like it? Leave your thoughts in the comments section below.