It's hard to believe that X-Men: Apocalypse is just a month away. With all the focus being on the other big comic book movie coming out in May, Captain America: Civil War, Apocalypse seems to be off everybody's radar. But it's still coming, and the trailers have been great. My only one complaint has been that the past two trailers were so similar to each other. We had the teaser trailer and then the second one, which just seemed like an extension of the teaser, albeit still great. But we haven't had much diversity in the trailers. So with the third trailer, I hoped that we would see something a little bit different. Maybe a change-up in tone or style. Just something new to get me excited for this film. And this new trailer definitely delivered!

I think this may be my favorite trailer for X-Men: Apocalypse, because of how different it feels. The first half is a rehash of what we've seen before, and that brings down this trailer a bit. But then it takes a turn and this refreshing guitar music begins to play, which adds a levity to the trailer. Then we see a whole bunch of new sh*t that made me wanting to see more! I am very excited to see this movie. Let Civil War have its moment in the spotlight, because I have a feeling that Apocalypse is going to be right up there with X-Men: Days of Future Past. It seems to be shaping up that way, that is. So this trailer just reaffirms for me my excitement for the film, and even adds to it with the tonal switch-up and great new footage. And, of course, we get to see Wolverine at the very end. I didn't need to see it in the trailer. I was actually impressed that they've kept Hugh Jackman's involvement a secret. But it was cool to see it at the very end. I'm interested to see how he works into the story. I guess all will be revealed next month. 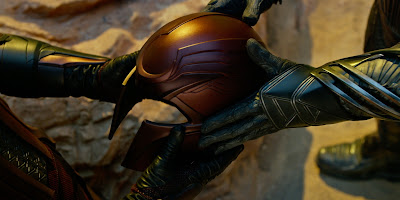