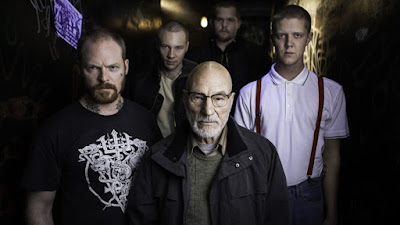 I was very excited going in to see Green Room. I wasn't enthralled by the trailer. It was good, but it didn't really capture my attention. But hearing the plot synopsis did, along with its Rotten Tomatoes score of 89%. Plus, people have been raving about this film. So I couldn't wait to see it. Patrick Stewart is a fantastic actor, and seeing him as a menacing Nazi was a compelling idea. But after seeing the movie for myself, I have to say it doesn't live up to all the hype-- at least for me anyways. Green Room has a strong premise, but quickly loses steam when it runs out of things for its underdeveloped characters to do in an over-long psychological thriller.

A young heavy metal band performs at a Neo-Nazi bar and see something they shouldn't have. Now, they must fight against the wits of the Nazi leader, Darcy (Patrick Stewart), in a brutal but necessary struggle to survive. 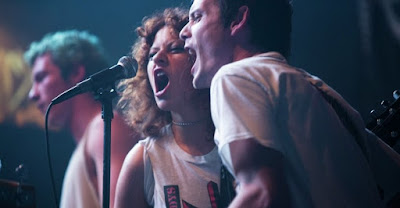 Let me start with the positives. Overall, this is a well acted film. Anton Yelchin, Alia Shawkat, Joe Cole, Callum Turner and Imogen Poots are all really good in their leading roles. They didn't have much to do, but they did good with what they were given. Stewart was menacing as his character, but again, not much to do. But I'll get into that later. I thought Jeremy Saulnier did a decent job directing. A lot of my problems had more to do with the writing and editing, not necessarily the directing. Then again, Saulnier did write the script too, so there's that. The beginning of the movie is really good. It starts off great, and has a strong momentum. It doesn't let up until maybe a third into the film. So I will contend that that first third is very strong, compared to the rest of the film. The violence and gore is also well choreographed and practically shot, making it feel very realistic.

Now for the negatives. I think this movie is a mess. There isn't enough substance in the film for the movie to sustain itself. Once the initial plot is put in place, it's as if the writer (Saulnier) didn't know what the f*ck next to do. They were in the green room. They left the green room. They went back. They left again. Saulnier could have concentrated the film to find meaningful and impacting things for the characters to do, but it just wasn't there. It's as if he was just trying to buy time until he could resolve the film. There's also no character development. I walked away from this movie not knowing a single character name. We knew these kids were in a band, and that's about it. It makes no attempt to explain who they are so that we could become attached to them; there's just no effort. So when sh*t went down, it looked cool but I didn't care what happened to the characters. 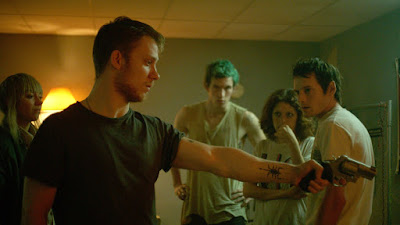 The editing is messy too. Emotional and powerful shots that needed to be held longer were cut too soon, and it ruined the power of the scene. Certain things were happening that needed time for the audience to digest and it just cuts right to the next thing. I can't tell whether it was how the scenes were shot or if it was the editing or both, but there many parts in the film where I was confused about what was going on in the scene. It was just very haphazardly edited and filmed. Characters are introduced into the story with no explanation as to why they are doing what they are doing, and seemingly serve no purpose. It just doesn't make a lot of sense. With all of these distractions, it was hard to get into the film and enjoy it.

Patrick Stewart is great in his role, but he doesn't do anything in the movie! He literally walks from point A to point B, and tells people what to do. It's a waste, because he doesn't do anything memorable. Also, you have no idea from the film alone that these people are Neo-Nazis. You know it if you read the plot synopsis ahead of time, but the word "Nazi" was only mentioned once. The movie needed a scene to show just how despicable these people were, and that they were actually Nazis. Because when the reason why the band is trapped in the green room is revealed, it's a very generic reason. It could apply to any gangsters or bad people, not specifically Nazis. So the cool element of this film is stripped. 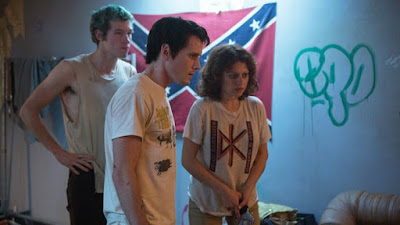 Overall, Green Room is a missed opportunity. Where you could have had a suspenseful and engaging psychological thriller, you only had the concept and skeleton of one. While it is well acted and the gore is well done, it holds no weight as none of the characters are developed. There was simply not enough substance for the film to sustain itself, and the characters end up running around aimlessly until the film ends. The editing and shooting of this film ruin certain scenes and trivialize what should have been major, game-changing moments. While Patrick Stewart is really good in the role, he is given nothing to do, and the Nazis are not even depicted as Nazis. Certain scenes did build up suspense and the first third of the film is really solid, but the entire movie as a whole just does not hold up as a quality suspense thriller.

What do you think? Have you seen Green Room? Did you like it? Leave your thoughts in the comments section below.