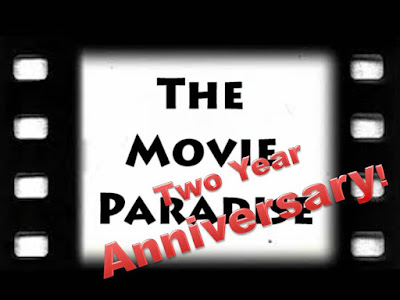 Two years ago today, I began The Movie Paradise. I didn't have any big ambitions with it-- I was simply a guy who loved movies and wanted to talk about them. So I created a blog and just started writing. I never expected it to become what it is today. After over thirty thousand hits, close to a thousand followers on Twitter, interviews and collaborations, I consider my site a success. For something that was never meant to be something to become something is an accomplishment in my eyes. Do I get millions of hits a day? Am I one of the top movie news sites on the Internet? F*ck no! Not even close. But I have created something that has become something, and that is achievement enough.

For two years I've continuously tried to develop and improve my site. I've redesigned the look of the site several times. I've tried out new editorial articles. Some have stuck and gone well, such as the Nerd Round-Ups. Others, not so much (remember when we had a podcast for like, five weeks?). But in the end, I don't care as much about how big this site gets or anything. That's not what matters. What matters to me is that I achieved something personally with this site, and I have been able to grow as a writer and as a lover of film. Writing reviews and news articles has helped me further mature and develop my thinking and appreciation for film, and that is something I will always be thankful of. But most of all, I love interacting with you guys. I love debating movie castings or films on Twitter. I love giving away digital copies of films. I love doing all of that.

There have been times where I've wanted to give up on the site. Where my personal life has just been so busy, that I've thought about just ending the site. Because finding time to write at least one article every couple days is legitimately hard. It may not sound like it, but it is. And plus, I try to post on a daily basis, or fairly daily basis. And sometimes I'm backed up three news articles and a review, plus trying to fit in special editorial articles... it's a lot to manage for something that's "just for fun". So there have been times where I've wanted to shut the whole thing down. But something goes out of its way to rejuvenate my excitement and passion, and it keeps this alive. I don't have plans to stop this anytime soon. I love doing it just too much. So I want to thank all of you for reading.