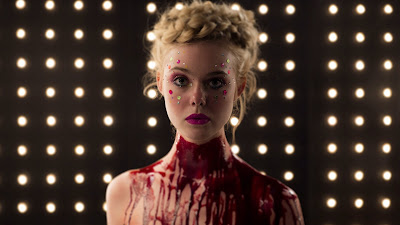 The Neon Demon was a film that I didn't have that much interest in seeing. I do really enjoy seeing out-there, artistic films, but the trailers for this film didn't necessarily intrigue me. It just wasn't really on my radar at all. But our other writer Rob saw the movie, and really wanted me to see it. The director, Nicolas Winding Refn, also directed Drive, one of his favorite movies, and one I have yet to see. So I agreed, and went to see The Neon Demon. And I walked out feeling mixed on the film. While it visually looks beautiful and gorgeous, with a fantastic soundtrack, the story and characters are really lacking and utterly underwhelming.

After just arriving in Los Angeles to begin her career in modelling, Jesse (Elle Fanning) begins rising up the ranks, far surpassing her colleagues who have been there far longer than she has. After her bout of success, rival models take it on themselves to put her back in her place. 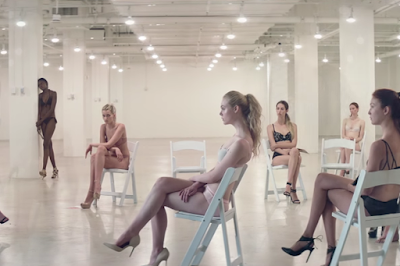 From a technical standpoint, The Neon Demon is fantastic. The cinematography in the film is absolutely beautiful, and stands out as a highlight. The camera is not only put in strategic and interesting places, but the use of mirrors and the different colors employed in every frame enriches the scenery. Natasha Braier did the cinematography, and she is deserving of high praise for her work. The continuous choice to view scenes of the film through mirrors added another layer to the overall piece, and led to some very interesting shots. The color choice was also abnormal, but it worked to make the frames pop on screen, and really stand out.

The soundtrack is also fantastic. It's retro, and as strange as the film itself, but it overpowers the scenes in a good way. It is one that you walk away really remembering. Last year, It Follows came out and I liked the movie for the most part, but the soundtrack stood out as being the best part of the film. The Neon Demon is this year's It Follows, in terms of the soundtrack. It is haunting and beautiful, and, paired with the cinematography, enhances the technical aspect of this film. Elle Fanning also gives a good performance as Jesse. She certainly carries the film well, and proves herself to be a very capable actor. The last thing I had seen her in was Maleficent, which was a movie I really did not like at all. So it was good to see her in a role that tested her acting capabilities, and let her shine on screen. 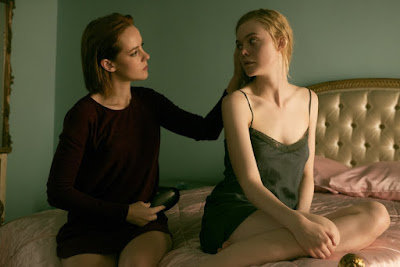 Unfortunately, those are the only good qualities of the film. The story and narrative actually starts of really strong, and tells a compelling story that I was invested in. But halfway through, it sacrifices this story in favor of giving us, albeit beautiful, camera shots that slowed down the narrative. The story halts, and then turns a completely irrelevant direction in order to give us an ending that is pure shock-value. This ending does not resolve the story at all, and adds no closure to the film whatsoever. It adds nothing. It really only serves to shock people, and to get people talking about the movie. This really disappointed me, because I wanted to see what happened to this young girl starting her career in LA, but we never get to see what happens with that. With a movie as different as this, if there were elements placed in the beginning that tied into the end, then it would have felt a lot more satisfying. But it was almost as if the second half of the movie was a completely different movie.

The supporting cast is also not very good. They are very bland characters, with very bland performances. They weave in and out of the story, and don't seem to add anything. They are just there. There's a sort-of love story going on between Jesse and Dean (Karl Glusman), but it ultimately goes nowhere. There are several shock scenes that happen that have no reason to happen, and the film offers no explanation as to why they are there (the scene with Jena Malone in a morgue is what I'm specifically talking about. You'll know what I mean when you see the movie). It's as if Refn felt he had to choose between being artistic and telling a capable story, when he didn't have to sacrifice anything. He went with the former when, for the sake of the film, he should have gone with the latter. 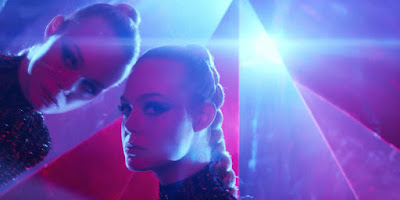 Overall, The Neon Demon is a technically beautiful film. The cinematography, paired with an amazing score, enhance the film and make it pop on screen. Elle Fanning is also really good as the lead in this film, and is very convincing. The story starts strong, but then fizzles out midway through the movie in order to simply give us artistic shots and shock-value scenes that don't add anything to the overall film. The supporting cast is bland, and doesn't necessarily add to the film. The movie felt like it needed to choose between being an artistic piece and having a quality story, when it didn't need to. The Neon Demon could have kept its artistry and its uniqueness, and could have told a meaningful story that made you invested, but unfortunately, it isn't capable of doing both.

What do you think? Have you seen The Neon Demon? Did you like it? Leave your (spoiler-free) thoughts in the comments section below.