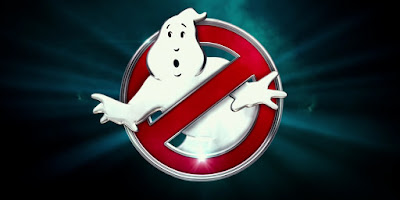 When I first heard that a Ghostbusters reboot was coming, with an all-female cast directed by Paul Feig, I was really excited. Feig did fantastic jobs directing Bridesmaids and The Heat, and this seemed like it would be a great project for him. But all my expectations went down the sh*tter when the first trailer hit. It just wasn't funny. Like at all. While many people completely disregarded this film after that, I held out hope. Maybe it was just one bad trailer. Then the second trailer hit. Then the third. Then the TV spots. And nothing was hitting the mark. But when we got positive critic ratings coming out of screenings of the film, I became hopeful again. Maybe Ghostbusters just suffered from a botched marketing job, and it is actually. So I went into the film with renewed faith. In short, Ghostbusters is a mixed bag. It has some really good, funny moments throughout the film, but the movie as a whole doesn't entirely work.

Erin Gilbert (Kristen Wiig) is looking at tenure at her university of employment, and is afraid her past involvement in writing a book about the paranormal with her old but estranged friend, Abby (Melissa McCarthy), may hurt her career. But when she meets with Abby in order to renounce her past, Erin's faith is renewed in the paranormal and helps form the Ghostbusters in order to save New York from a plot to unleash the supernatural. 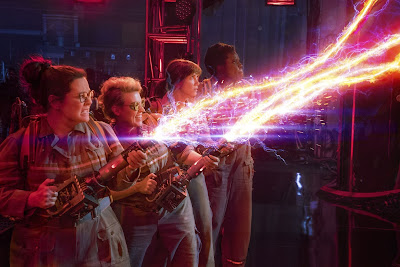 The chemistry between the main cast is palpable, and excellent. They each bring their own uniqueness to the table, and all add a lot. However, Leslie Jones stole the movie for me, as she has some of the best lines, best moments, and was the most consistently funny in the group. These are all incredibly talented women, and they worked really well together. Their dynamic alone is why I would like to see a sequel. Chris Hemsworth is also excellent as their secretary. Although the character may be a bit too dumb to be believable, he has a lot of great comedic moments, and certainly adds a lot to the movie. They give him a lot more to do in this movie than the secretary got to do in the original Ghostbusters, which is good, because it never felt like they wasted Hemsworth's talented, but they didn't enlarge his role simply to capitalize on him. It felt organic.

As I said in the beginning, this movie is filled with great, funny moments. Certain lines, certain scenes knock it out of the park. But as a cohesive film, it doesn't have the same momentum. A lot of that funniness is worn down as the film progresses. But that doesn't take away from the fact that this is a funny movie. I would say 75% of the jokes land, which is impressive compared to what people thought it would be after the trailers. And I do have to mention that I saw this film in 3D, and the 3D was fantastic in this movie. They really utilized it well. Things popped out of frame, and jumped in your face. This aspect of the film was really well done, and very entertaining. 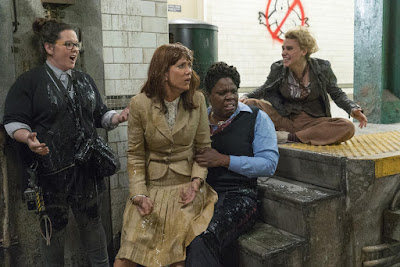 The problem for me with this movie is the story. It focuses so much on the dynamic of the characters that the story itself is just very stale. A nerdy scientist wants to destroy the world by unleashing ghosts. Electrifying. It could have been done better. And the final act of the film was just way too much. It went too far into CGI spectacle, and it just needed to be toned down. The movie gets too big, and it really didn't need to. There were so many ghosts and so much going on that the film kind of went too far too fast. This movie needed to be a lot smaller, and then branch out in further sequels. But they blew it too soon. The film's strength was when the Ghostbusters were assembling and testing out their equipment and experimenting. As soon as the movie diverged from that, it lost a lot of its strength.

I also thought that Kate McKinnon was way too over the top. The way I'd describe her performance is that she's like that kid in the high school theater production who would always be in character in the background even when they weren't doing anything in the scene. Because that's what she does. Regardless of what's going on, McKinnon is always moving or doing something, and it becomes incredibly distracting. Her character is also just way too weird. It felt like she didn't even follow the script. They just started rolling the camera and let her do whatever the hell she wanted to. She felt really out of place. Yes, some of her lines were funny, but I think they needed to tone her down a lot, because after a while she became very annoying. 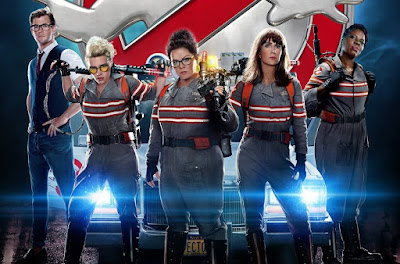 Overall, Ghostbusters is on and off. It has great comedic moments dispersed throughout the film. But the movie as a whole isn't overly strong. The chemistry between the main cast is fantastic, and their dynamic is what makes the film. Leslie Jones especially steals the movie for me. However, Kate McKinnon was too over the top, and felt out of place. Chris Hemsworth, though his character is not believable, does a great job with the comedy in this film. The story itself is ordinary and not very exciting, and the ending was too big for this film. In the end, this is my least favorite Paul Feig comedy that he's done, but it's not a bad movie. This film wasn't accurately portrayed by the trailers, and should have been marketed better. This isn't a great movie, but I do recommend checking it out. I have no real desire to see this film again, but I definitely want to see a sequel.

What do you think? Have you seen Ghostbusters? Did you like it? Leave your (spoiler-free) thoughts in the comments section below.