It was just last San Diego Comic Con where the Kong: Skull Island film was announced, as a sort of prequel to the traditional King Kong story. The movie became even more interesting when it was revealed to be a part of a shared Godzilla/King Kong universe, with this film reintroducing us to the king of the apes. But whether this prequel could stand as its own film remained unknown to me, and something I was waiting to judge until I saw footage for the movie. Well now, at this year's convention, we get our first look at the new film.

I thought this trailer was awesome! It looks as if they are making a big-budget horror movie, which is a really interesting take. Visually, everything looks great, and I found Samuel L. Jackson and John Goodman's exchanges to be eerie and fascinating, and its a dynamic I want to see explored further in the movie. It looks like this entire movie is a remake of the first half of Peter Jackson's King Kong movie, and I just hope it can sustain a full film. That's why we need to be invested in the characters, because that's the only way this film will succeed. But from this footage alone, it looks like we'll have some very strong characters. I already commented on Jackson and Goodman, but Tom Hiddleston and Brie Larson also look great, as well as the rest of the cast. I am very intrigued by this movie, and I think it has a lot of potential! 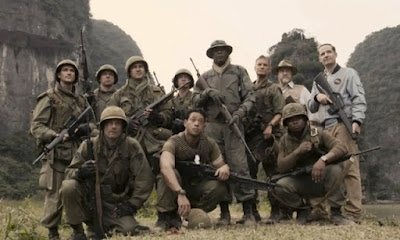 What do you think? Do you like the trailer for Kong: Skull Island? Are you looking forward to seeing the film? Leave your thoughts in the comments section below.