Wonder Woman will be the first female-led superhero film of the modern age, and it's a project that has many people excited. Gal Gadot proved to be one of the best parts of Batman v. Superman: Dawn of Justice, and has led many to highly anticipate this film. Just a few days ago, we got a series of new pictures from the film (which you can see here), which had us to believe that a trailer was eminent at San Diego Comic Con this week. And, sure enough, DC did not disappoint. We know have our first, full trailer for the film.

I absolutely love this trailer! It's shot beautifully, with great camera angles. The music is elegant and badass at the same time, and the trailer does a great job of weaving the sound effects in and out of the soundtrack. The action looks spectacular. It's everything you would want from a Wonder Woman movie. The choreography just looks gorgeous, and just for that it bumped up majorly in my excitement level. Chris Pine looks great in the film. He was excellent in last weekend's Star Trek Beyond (read our review here), and it seems he'll be just as good in this. While Gal Gadot proves to be incredible with the action, I'm not sold on her acting yet. I'll just have to wait for the film to judge that one. But overall, this was a fantastic first trailer and does a lot to silence DC critics. 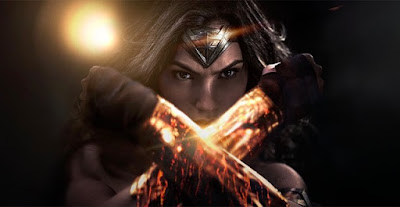 What do you think? Did you like the Wonder Woman trailer? Are you looking forward to seeing the film? Leave your thoughts in the comments section below.