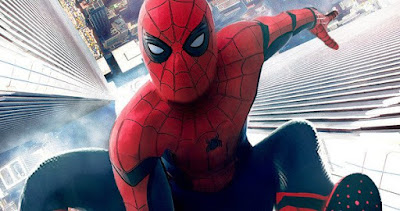 Ever since Tom Holland wowed audiences as Spider-Man in Captain America: Civil War, fans have eagerly turned their eyes to the webslinger's solo film, coming out next summer. We don't know much about the film, other than the fact that Michael Keaton will play the villain. He was heavily rumored to be playing one of Spidey's oldest villains, the Vulture, but it was never confirmed. But now, it seems we officially know Keaton's character.

At the Spider-Man: Homecoming panel at San Diego Comic Con, a piece of concept art from the film was released, showing the wallcrawler battling none other than the Vulture. You can view the artwork for yourself below:

While I'm glad that we officially know Keaton is playing the Vulture, I'm not too crazy about the design of the suit. They were never going to go with the character's traditional skin-tight green suit, but I did want them to go a little more classic with the costume. It looks just a little too retro. It's similar to how I felt about the Rhino in The Amazing Spider-Man 2. I knew they weren't going to do his traditional costume, but I wanted it to be a bit more than just a mechanized suit. I don't know, maybe it's just the Spider-Man purist in me. But look, this could end up being really cool on screen; I'm just not crazy about it now. The filmmakers have plenty of time to change my mind. Let's wait until we see a trailer or something, and then I can more accurately make up my mind.

What do you think? Do you like the concept art? Do you like the design of the Vulture? Are you looking forward to seeing Spider-Man: Homecoming? Leave your thoughts in the comments section below.