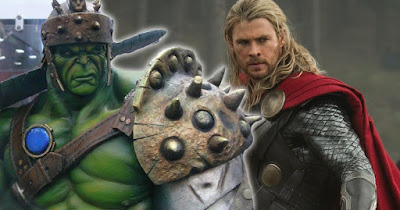 One of the most famous Hulk story lines from the comics is Planet Hulk, in which the Hulk is blasted off into space and crash lands on an alien planet, which he is put into slavery and forced to battle in gladiatorial games. He quickly rises up the ranks and leads a rebellion against the tyrannical king of this world. And for a long time, fans have called for a movie adaptation of this story. It seemed like we would never get it, until it was confirmed that the Hulk (Mark Ruffalo) will be in the upcoming Thor: Ragnarok. Since then, its been speculated endlessly that the film will borrow elements of Planet Hulk, but this had never been officially confirmed, until now.

At San Diego Comic Con, props from the film were set up, including the armor the Hulk will don in the arena. You can view the image below: 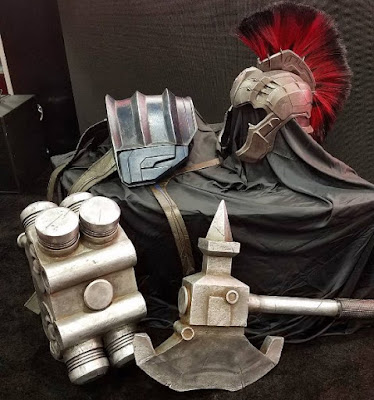 This really excites me. The armor is right out of the comic book, and looks perfect. I don't know how much of the comic they're adapting, but so far it looks excellent. They also showed a brief teaser at Hall H, one that the general public has yet to see. But from the reports, it sounds like we'll see the Hulk and Thor (Chris Hemsworth) square off in the arena. If you thought their fight in The Avengers was cool, this will definitely be something to see. But regardless, the armor looks fantastic. I am so glad they are bringing elements of Planet Hulk to this movie, because its a great comic series. And I can't wait to see where this film goes.

What do you think? Do you like the design of the Hulk's armor? Are you glad they are adapting parts of Planet Hulk in Thor: Ragnarok? Are you looking forward to seeing the film? Leave your thoughts in the comments section below.