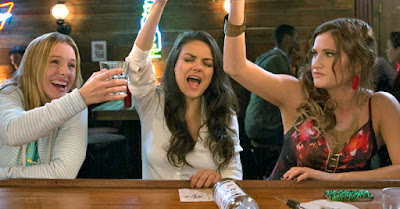 I really don't know why the hell I saw this movie. The trailers weren't funny. The premise was ridiculous. I only went because a couple of my friends wanted to go and I thought "Oh what the hell." So needless to say, I didn't have very high expectations for Bad Moms. All I wanted to do was laugh a little bit, joke around with my friends, and have an enjoyable 90 minutes in the theater. I didn't need a good story. I didn't need good characters. I just wanted to laugh a bit. Ultimately, Bad Moms is not a good movie. But it is entertaining enough to waste your time on to get a few good laughs out of, even if it doesn't reach the comedic dynamics of say a Seth Rogen comedy.

Amy (Mila Kunis) is trying the best she can to be a good mom. Her marriage is falling apart. She's overworking and is underpaid. She is trying to be actively involved in her kids' lives. Until one day she decides "F*ck it, I'm done." Then on, she and her new-found friends, the outrageous Carla (Kathryn Hahn) and the timid Kiki (Kristen Bell) decide to raise hell and enjoy themselves for once instead of trying to please everyone. 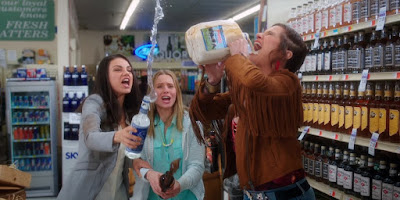 The best part of this movie is the chemistry and dynamic between the three main stars. Kunis, Bell and Hahn all work really good together on screen, and their characters work as well. Both Bell and Hahn are extremes on each end, while Kunis balances them out by being in the middle. She's a realistic character, and anchors the film. I haven't seen her do a good job in a movie yet, but she was actually really solid in Bad Moms. The highlight is the dynamic between these three characters, and just seeing them all together on screen was entertaining. But Kathryn Hahn definitely steals this movie. She's foul-mouthed, high-energy and is a complete bitch to everyone, and it's fantastic to watch. Her jokes just keep coming non-stop. Her comedy is more frequent and more consistent than her other co-stars, and she is just great in this film. Sometimes her character became a bit much, but she had more hits than misses in this movie.

My problem with this movie is that it's not always funny. There are some great moments and some great lines, but there are a lot of jokes that don't land. Sometimes, it can be pretty painful trying to get through these jokes that just aren't funny. The movie keeps hammering in these jokes that aren't good, but forces it down our throats. A comedy's sole purpose is to make people laugh, and if it can't do that then it doesn't work as a comedy, plain and simple. Also, the gimmick of seeing these good moms do bad things gets old very quickly. At first it's funny but as the film progresses, it becomes redundant. Okay, we get it. Mila Kunis is drinking a lot of vodka on a school night. We get it. They never took the premise out of the starting gate and expanded upon it. It just stayed this film looking at these moms and saying "Hey, isn't it funny how these good moms are doing bad things?". The movie needed to make that the launch pad, and not the entire film. 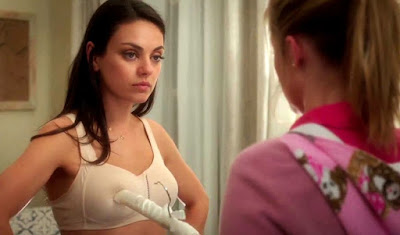 I'm all for movies that are led by funny women. I love to see these movies and I want more of them. But a big problem I had with this movie is that it constantly called upon the fact that this movie had funny women in it. Let's take a look at Bridesmaids. It was a great comedy that was led by funny women, but the movie never made a case for itself having these funny women in leading roles. It never threw it in your face and said "Look at this!". It was just a good movie. Bad Moms constantly has to remind you that funny women are leading this film, and it becomes really annoying. I'm not saying it had a feminist agenda, because that's a really harsh sounding term, but that's the closest thing I can think of to describe this. It made the fact that funny women were leading this movie feel like it was going against the norm when it should have worked to normalize it instead.

Overall, Bad Moms is not a good movie, but it does have some good parts. Mila Kunis, Kristen Bell and Kathryn Hahn have great chemistry together, and have a great dynamic. Hahn especially steals the show, with being so outrageous and over-the-top. However, this movie is only peppered with good jokes and scenes, and isn't consistent in the quality of its comedy. The gimmick of good moms doing bad things becomes redundant, and the film never progresses beyond that initial premise. This film also works to constantly throw it in your face that the movie is led by funny women, instead of letting it come about naturally. In the end, Bad Moms is a movie to catch on HBO or Netflix if you want to waste an evening, but is hardly worth dropping everything to watch in theaters. 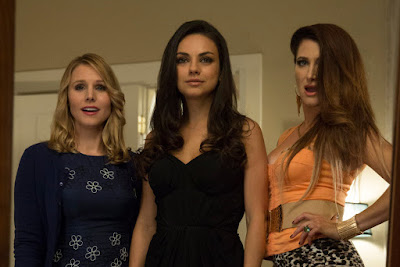 What do you think? Have you seen Bad Moms? Did you like the film? Leave your (spoiler-free) thoughts in the comments section below.