Beauty and the Beast- New Image Reveals Lumiere and Cogsworth 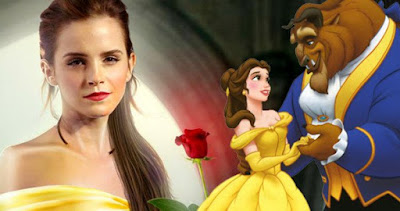 While Disney hasn't necessarily been on a roll with their live action adaptations of their popular animated movies, 2016 has certainly been a good year. April's The Jungle Book was fantastic, and this past month saw Pete's Dragon, which was good on its own merits (you can read our review here). So with 2016 being a good year for these adaptations, it makes one more hopeful looking into the future, especially for next year's Beauty and the Beast. I have been excited for this movie from the beginning. There's a lot of possibilities with turning it into a live action film, and the cast is remarkable. This movie has a lot of potential, and I'm really excited for it. And now we have a new image from the movie, giving us a look at the style of the character design.

A picture has been released, revealing Lumiere (Ewan McGreggor) and Cogsworth (Ian McKellen), which you can view below. 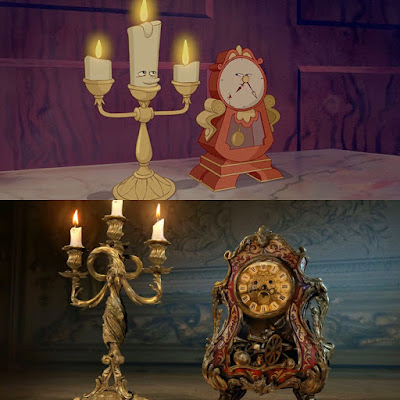 I surprisingly like it. At first I was thrown off, but then I realized that having giant white eyes on a candlestick would look ridiculous in live action. So making the human features on the objects more subtle is definitely the best way to go. However, I can't even see the face on Lumiere. Hopefully it will be more apparent in the actual movie, because it's really hard to tell at this point. I think it was a great move to make these two characters the first we see, because they are undoubtedly the most important characters. They are the only two characters we heard in the teaser trailer, and they are central to the plot in the animated film. But now that we know the style they're going for, more subtle in the human features, I'm excited to see what everything else looks like. And I'm especially excited to see the design of the Beast (Dan Stevens). So really, this image just reaffirms for me my hopes that this will end up being a really good film.

What do you think? Do you like the design of Lumiere and Cogsworth? Is it good that they're going with subtler human features for the objects? Are you looking forward to seeing Beauty and the Beast? Be our guest to leave your thoughts in the comments section below.