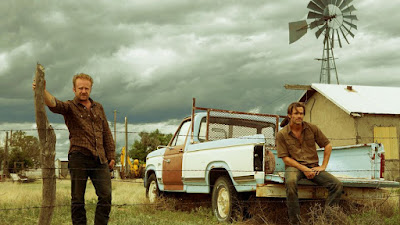 I've been really looking forward to seeing Hell or High Water. I wasn't first-in-line excited, but I was very interested in it. Chris Pine is shaping up to be a very capable actor, and Ben Foster and Jeff Bridges are both tremendous talents. Plus, the idea of a plot centered around two bank robbers in Texas sounded like it could be a fascinating drama. So I went into this movie with high expectations, especially after it got a 98% on Rotten Tomatoes. A couple of my friends saw the movie before me, and were raving about it, so maybe that skewed my anticipation for the film and put it unrealistically high, because I was thinking this could end up being one of my favorites of the year. And in short, it isn't, though it is really good. Hell or High Water proves itself to be a very competent drama, even if it doesn't meet the expectations (unfairly) put on it.

Two Texas brothers, Toby (Pine) and Tanner Howard (Foster) rob banks in order to gain money for a better reason than you would think. They're not heroes, but they're not evil either. But when robberies break out all over the place, Sheriff Hamilton (Bridges), who is on the brink of retirement, must work with his replacement, Alberto (Gil Birmingham), in order to catch these criminals. 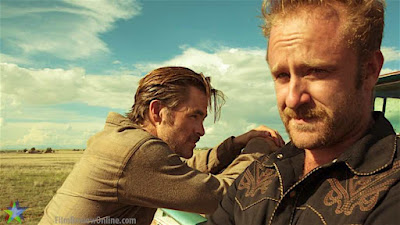 This movie is definitely a slow burn. It keeps building and building until it amounts to something at the end. It puts the emphasis on the characters, their dynamics, and putting that to the test. Sure, the bank robbery scenes are adrenaline rushing, but the core of this movie is really the relationship between two brothers and their ideological differences. Chris Pine plays the straight arrow who has more of an ethical reason for what he's doing, even though he knows its wrong. Whereas Ben Foster plays an ex-con who's just looking for a thrill. But regardless of the difference in ideologies, you see an inherent bond between these two brothers that transcends the events of the film, and that was something great to see.

But I do think the strength of this film was the power in its performances. Pine and Foster were phenomenal, and absolutely hit it home. But Bridges was fantastic himself, and brought a nice balance to the film. These were three powerhouse performances that really made this movie. If it wasn't for these three actors, then I don't think this movie would have the same punch that it does. Sure, the action and the drama is interesting to watch, but these performances sell it, and make it what it is. I don't think anyone will end up getting nominated for an Oscar for this film, but I wish they would because these performances are top-notch. 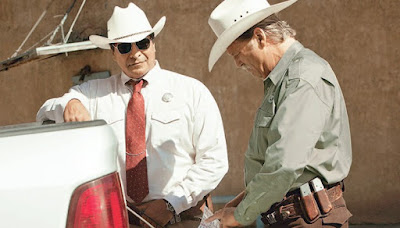 For me, the film is a bit too slow. It takes a while for things to get going, and while the pay-off is good, it isn't as satisfying as I wanted it to be. I can appreciate slow burning movies, but this film just took too long to get going. It needed more momentum, a sense of urgency that would keep you on the edge of your seat. But it didn't have that. The plot is also very simplistic. It didn't quite have the layers or the depth that I wanted it to have. What makes this movie is the performances, but the story itself could have been a little bit more. I appreciated the reveal of why they are doing what they are doing, but that's the motivation. The story needed more depth than it had, and its simplicity just didn't help the movie.

Overall, Hell or High Water is a very good movie. It's a slow burn that builds up to a climax, although the climax wasn't as big as I wanted it to be. The center of the film is the relationship between two brothers, and that dynamic was fantastic. It was brought to life perfectly by Chris Pine and Ben Foster, who gave terrific performances. Jeff Bridges was also fantastic in his role as the Sheriff. I do wish there were more layers and depth to the film than it had, because the plot is a bit simplistic. But in the end, Hell or High Water proves to be an effective and enjoyable movie that may not be the best, but is driven home by its powerhouse performances. 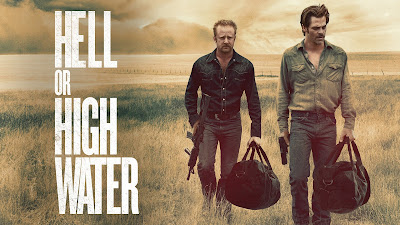 What do you think? Have you seen Hell or High Water? Did you like it? Leave your (spoiler-free) thoughts in the comments section below.