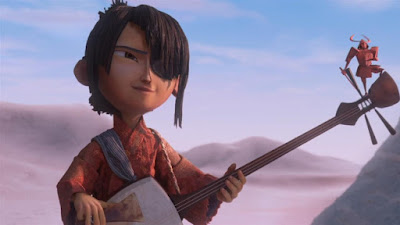 For a while, I wasn't really interested in seeing Kubo and the Two Strings. The trailers weren't very gripping to me. I've just never gotten into stop motion animation. Maybe it's wrong of me to assume without having seen any of this studio's previous films like ParaNorman or Coraline. The only stop motion I had seen were movies like Chicken Run and Wallace & Gromit, and as a kid I think the animation freaked me out more than anything. So maybe I was just being ignorant, but I didn't have much interest in seeing Kubo. But hey, it got a 96% on Rotten Tomatoes, so it had to be somewhat decent, right? So I decided to go and check it out. And I'm really glad I did, because this is a fantastic movie. Kubo gives us a surprisingly adult story filled with great fantasy action and a powerful message about dealing with death and grief.

Kubo (Art Parkinson) is a young storyteller who is in hiding from his wicked grandfather, the Moon King (Ralph Fiennes), and his two witch aunts. When Kubo is found, he must embark on a journey with a monkey (Charlize Theron) and a giant beetle warrior (Matthew McConaughey). 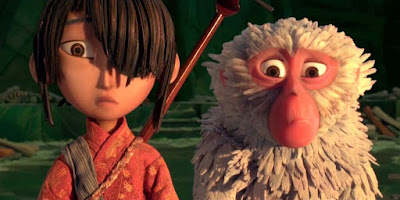 First and foremost, I couldn't have been more wrong about stop motion animation. It is absolutely beautiful in this film. What they were able to accomplish with it is mind-blowing. It also adds a lot to the story. They could have done this with regular 3D animation, but the fact that it's stop motion adds an entirely new feel to it. There is so much more to this movie than just its stop motion animation, but it is the most impressive aspect of this film. I cannot begin to comprehend the amount of work that went into making these elaborate scenes come to life, and I have to give the filmmakers props for taking on such an audacious project. It truly is spectacular to watch.

But the stop motion wouldn't be nearly as incredible if it weren't for the fact that this is a great movie on its own. It's so captivating and engaging that I completely forgot about the stop motion, and was just immersed in the film. The characters are fleshed out, and Kubo is a compelling lead character. There was a good character dynamic between Kubo, Monkey and Beetle, because they all had different, clashing character traits that led to entertaining banter. The movie, surprisingly, has very adult and mature themes. A lot of bad things happen in this movie, and I was kind of surprised that some of the things were actually happening. This film has a very strong and powerful message about dealing with death and grief. I won't go into details, because I don't want to spoil it, but it's incredibly moving. 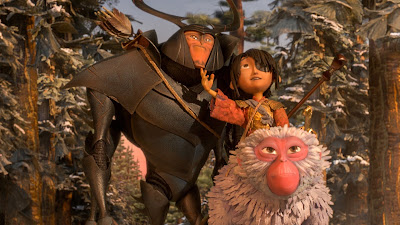 My problems with the movie are minimal. I absolutely loved the first third of this film and was completely locked in. But as soon as the actual quest itself came about, I wasn't as engaged. I just thought the mission itself could have been more fleshed out, and could have been more compelling. I just didn't feel the sense of urgency that I should have. But the thing I took most issue with was the whitewashing of the voice cast. I loved and appreciated that this movie put such a focus on Asian culture, but the main voice cast is all white. That wouldn't have bothered me as much if it wasn't for the fact that they were voicing Asian characters. Matthew McConaughey, full Southern accent, is playing an Asian man. And the voice cast that is Asian, such as George Takei, has top billing but only has a few lines. Like I said, it wouldn't have bothered me if the white voice cast was playing white characters, but they were playing Asian characters. Why couldn't you have gotten Asian actors? That just bothered me. In the grand scheme, it doesn't take away from this being a fantastic movie, but that just annoyed me.

Overall, Kubo and the Two Strings is a gorgeous movie. The stop motion animation is breathtaking, and is incredibly impressive. This is a captivating and entirely immersive film. For much of it, I completely forgot about the stop motion, and I was just engaged with the film. It's also probably one of the best fantasy movies I've seen in a while. But that's not really saying much. What's it's competition? Seventh Son?  The characters are all three dimensional, and fleshed out. The first third of this movie is fantastic, but once it got to the actual quest I wasn't as invested. It needed a bigger sense of urgency than it had. And the whitewashing of the voice cast bothered me. But in the end, Kubo and the Two Strings is a magnificent film that is definitely one to see in theaters. And if you had any hesitations about it being stop motion animation, it works wonderfully for the film. 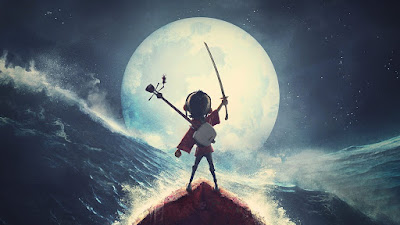 What do you think? Have you seen Kubo and the Two Strings? Did you like it? Leave your (spoiler-free) thoughts in the comments section below.