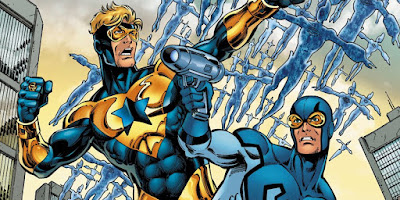 About a year ago, DC confirmed that they were developing a Booster Gold and Blue Beetle movie, with DC TV producer Greg Berlanti at the helm of the project. It was said to be in the style of a buddy cop movie, with it being much lighter and funnier than DC's previous films. When I first heard about this, I was intrigued, but not entirely sold. I really liked the idea of a comedy from DC, using these unique and more ridiculous characters. But I had one real hesitation. How would a buddy comedy movie fit into the same cinematic universe as Batman, who brutally murders criminals? I just didn't see a guy like Booster Gold interacting with this version of Batman and Superman and Wonder Woman on screen. However, an answer has now come out that would solve all of these problems surrounding the project.

In a recent interview, Berlanti was asked about the Booster Gold/Blue Beetle movie, and how it would end up fitting into the DC Cinematic Universe. To this, Berlanti responded:

"As of right now (the film has) no connective tissue to those worlds... it'd be a separate thing." 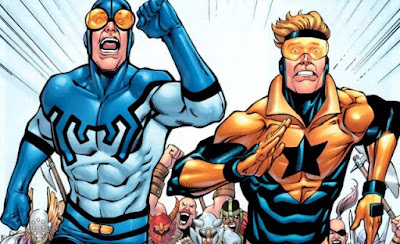 I think this is the best decision. I don't think you can make a Booster Gold/Blue Beetle movie in the vein of Batman v. Superman: Dawn of Justice. I don't think you can have Booster Gold snapping necks and Blue Beetle branding people. It just doesn't work. You need this to be in a separate, pocket universe that has nothing to do with the Justice League, or anything like that. And I think this idea of separate universes opens up a lot of new possibilities. You can have Justice League Dark (read about that here) separate from Justice League. You could introduce new superheroes from the comics and keep them separate. Not everything has to be interconnected and interwoven, and you can have the one hero in a city by him/herself again. I kind of miss that about the original Spider-Man or The Dark Knight Trilogy. There aren't a thousand superheroes. There's only one. And with Booster Gold/Blue Beetle being in a separate universe, you open up the possibility for that to happen again in comic book movies.

What do you think? Is it a good idea that Booster Gold/Blue Beetle are not a part of the DC Cinematic Universe? What other DC characters would you like to either see with Blue Beetle and Booster Gold, or in their own universe? Are separate, pocket universes the future for keeping comic book movies diverse and interesting? Leave your thoughts in the comments section below.