First Trailer for Live By Night

Ben Affleck has been having quite a year. He made his DC debut in March, with Batman v. Superman: Dawn of Justice. Though the film wasn't met with the best of responses, Affleck was highly praised for his turn as the Dark Knight, and was, in my opinion, the best part of the film. He is also starring in The Accountant next month, and I am really looking forward to that movie. But he also has another film coming out called Live By Night, which he wrote, direct and stars in. Now, I didn't know that Live By Night came out this year. I didn't have any concept of when this movie was coming out at all. I wasn't even aware they had even filmed it. But apparently it goes into limited release in December, and has a wide release scheduled for January of 2017. So since I wasn't aware of that, I was really surprised to see that a trailer had dropped. And I watched it, without knowing really anything about the plot.

This was a really good trailer. It looks like Affleck is trying to take the crime thriller element of The Town, but incorporate the time period nature of Argo as well. And it looks like a perfect synthesis. This really seems like the ideal kind of movie for Affleck. Say what you want about his acting, but he has proven himself to be a masterful director. And this kind of film is really suited to his directing talents. I think this kind of gritty, street-level crime capper movie will be a good indicator of what he could do with bringing Gotham City to the big screen, since he'll be directing the solo Batman movie. With Live By Night's limited December release, it looks like it's trying to maybe get some Oscar love, and from the looks of this trailer, it definitely has the potential for it. We'll have to wait and see if it is actually that kind of movie, or if it's more of just a fun, entertaining thriller. But, needless to say, I'm really excited to see this movie. 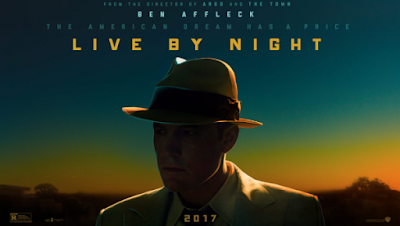 What do you think? Did you like the trailer for Live By Night? Are you looking forward to seeing the film? Leave your thoughts in the comments section below.