Jessica Chastain is an actress who just gets better and better with every film she does. I didn't see Huntsman: Winter's War, so I can't comment on her acting chops in that movie, but from everything I've seen her in, she's been excellent. So when I heard there was a political thriller coming out around Oscar time starring Chastain, I immediately became very excited. She's been nominated for two Oscars already, and she has many more nominations ahead of her. But from the sounds of it, this movie has all the makings to be a major Oscar contender, and a chance for Chastain to add another nomination under her belt. So, needless to say, I was excited to see that a trailer for Miss Sloane had dropped online.

I actually really liked this trailer. Chastain proves her character to be a very formidable and intimidating person, and she looked fantastic in the role. The issue of gun control is something that is a hot topic in our country today, and it's impressive to see that the film has the balls to tackle such an issue so head-on. The supporting cast looks good, especially John Lithgow and Mark Strong. The trailer didn't give us a lot, but that's because this is a teaser trailer. And I didn't necessarily need it to spell everything out for me. It gave me a basic idea of what's going on, a glimpse at the tone of the film, and a brief look at Chastain's performance. That's all I needed to know to get excited for this movie. This could end up not being the movie I want it to be, but from everything I've seen, I think this has all the makings to be an Oscar contender this year! 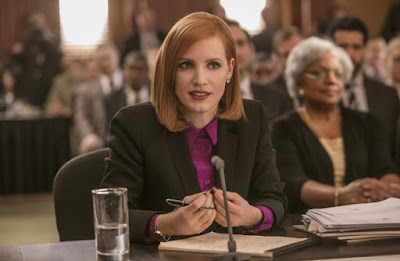 What do you think? Did you like the trailer for Miss Sloane? Are you looking forward to seeing the film? Leave your thoughts in the comments section below.