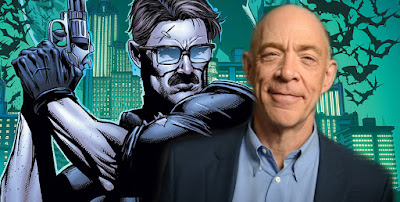 We've known for a while now that J.K. Simmons would be playing Commissioner Gordon in the DC Cinematic Universe. We've also known that he would have a very brief role in Justice League, but would have a much more substantial role in the Batman solo film. I love Simmons as an actor, but I've never really seen him as Gordon. Maybe it's because I loved Gary Oldman in the role so much in The Dark Knight Trilogy, and the fact that I attribute Simmons to J. Jonah Jameson in Spider-Man, but I've never really been able to picture him as Commissioner Gordon. I've had faith, though, that it would work, but I've wanted to see an image of him in costume so that I could be sold on the fit. However, we have yet to get a picture of Simmons as Gordon, until now.

To celebrate Batman Day this past Saturday, Justice League director Zack Snyder dropped a noir-heavy wide shot of Simmons' Gordon standing next to the Batsignal. You can view the original image below, along with several zoomed in and cropped images to try to get a better look at Simmons in costume. 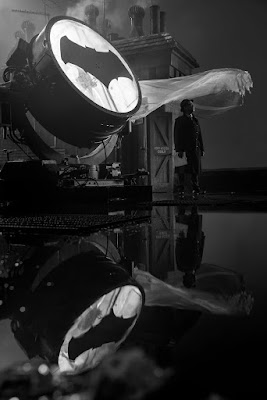 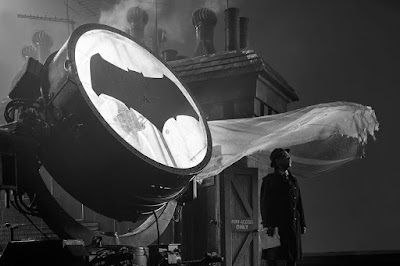 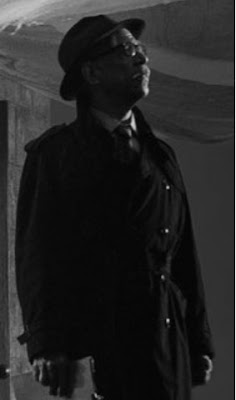 Now that I see Simmons in costume, I finally recognize that he's a great fit. The costume design looks right out of the comics, right down to the trench coat, the hat, the glasses and the classic mustache. All he's missing is the cigarette or cigar (depending upon the comic), which I'm sure he'll light up in the next frame. I think the costume design is even more spot-on than the Oldman's design in The Dark Knight Trilogy, and I always praised that as being perfectly adapted from the comics. I really think now that Simmons is going to knock this out of the park. He has proved himself time and time again to be a phenomenal actor, but he is also one of the great supporting actors. He can give a fantastic performance, but knows how to give it without upstaging the true focus of the film. I think he'll give a great performance that won't overshadow Ben Affleck as Batman, but we'll end up walking away thinking about just how great Simmons actually was.

What do you think? Do you like the look of J.K. Simmons as Commissioner Gordon? How do you think he'll be in the film? Leave your thoughts in the comments section below.