When Spider-Man: Homecoming was first announced, one of the first people to be attached to the film was Robert Downey Jr. as Tony Stark/Iron Man. The relationship between Peter Parker (Tom Holland) and Stark was a small but strong part of Captain America: Civil War, and it's great to know that that dynamic will be continued into Holland's solo film. But with Downey Jr. in Homecoming, the question has become how central of a figure he will be to the movie. Is this a cameo performance, or will he end up being the second lead? It's impossible to know the answer until someone involved with the movie comes out and confirms something. But we can start to piece together a basic idea based upon subsequent casting announcements. And one of Tony Stark's closest friends has now been cast in the film.

It has been confirmed that Jon Favreau will reprise his role as Happy Hogan, Tony Stark's friend and bodyguard, in Spider-Man: Homecoming. At first I was surprised by this, but now I think it just makes sense. Happy is the best of Stark's central team (also including Rhodey and Pepper) to follow him to Homecoming, because he is Stark's bodyguard. Favreau doesn't even have to have many lines. He can just be the guy who stands around Tony and informs him the Vulture is attacking the city, and Iron Man needs to suit up... or something like that. I guess I'm more surprised that Favreau is continuing to act in the Marvel Cinematic Universe. He acted in the first two Iron Man movies mainly because he directed those films, and he was only in the third one to be blown up and spend the majority of the movie in a hospital bed. Sure, Favreau is attached as a producer to Avengers: Infinity War, but I just assumed he was done acting in Marvel movies. So I guess that's the biggest surprise of this casting announcement, for me at least. 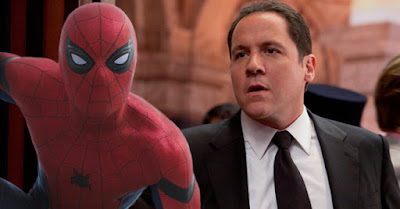 What do you think? Are you glad that Jon Favreau is returning to play Happy Hogan in Spider-Man: Homecoming? How big of a role do you think he and Tony Stark will have? Are you looking forward to seeing the film? Leave your thoughts in the comments section below.