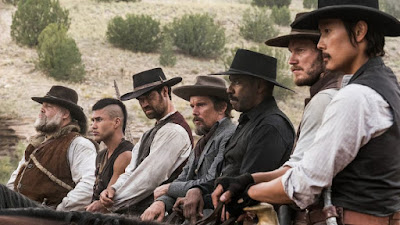 The Magnificent Seven has been one of my most anticipated films of the year, and definitely my most anticipated of the fall. I have loved the trailers. From the style to the action-- it's all looked fantastic. Plus, you have talent like Denzel Washington, Chris Pratt, Ethan Hawke, Vincent D'Onofrio, and Antoine Fuqua behind the camera. It was a recipe for a damn good batch of cookies. So I had very high expectations for this film. I walked in wanting to love it, and wanting it to be one of my favorites of the year. And maybe my expectations were ultimately too high. Don't get me wrong, I really liked this film, but I just didn't love it the way I thought I was going to. The Magnificent Seven is a very engaging and thrilling film, even if it doesn't reach the heights I had wanted it to.

After the evil Bartholomew Bogue (Alexander Sarsgard) takes over a small town, recently widowed Emma (Haley Bennett) enlists the help of bounty hunter Chisolm (Denzel Washington) in order to take back the town. To fulfill this, Chisolm recruits the help of six others in order to defeat Bogue and to save the town. 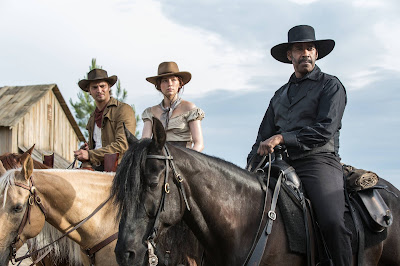 I really enjoyed this film. What stands out about this movie is obviously the action. It's what you go to see this film for. And it doesn't disappoint. Antoine Fuqua knows how to direct action sequences. He doesn't fall back on shaky cam or rapid editing or any of that modern action movie bullsh*t. He keeps the camera steady and gives us wide shots, because he knows that's what people want to see. And that style of filming really works well for a Western. Everyone in this movie is pretty much a badass, and Fuqua knows we aren't going to see this movie for a deep plot or rich characters. We want to see sh*t blow up and action stars do cool things. And he delivers in spades! But while the third act finale fight was really good, I liked the shorter, smaller fight that happens in the second act better. It was just more concise and to the point, and ultimately better done. But even though the finale fight didn't live up to that second act fight, it was still great to see on screen.

And the performances in this film are all also really good. Denzel is Denzel in this. He's just kicking ass and taking names. Chris Pratt is also really good. He does have a few Star-Lord moments, but overall, he's just as kickass as Washington is. And they added a very subtle character flaw to him in his being an alcoholic. It was never mentioned, but they showed it repeatedly, and I really appreciated the level of subtlety. Ethan Hawke and Vincent D'Onofrio are also very good in this, and D'Onofrio tries to do something... shall we say unique... with his voice, and it makes him memorable, I'll give him that. I don't know if it benefited the character, but it makes him stand-out in the film in a better way than worse way. So I guess that's a good thing. But Byung-hun Lee stole the movie for me. He was an absolute badass, and was incredible to watch on screen. I need to see him in more movies, because he just crushed it. Honestly, he was more badass than Denzel, and that's a hard thing to do. 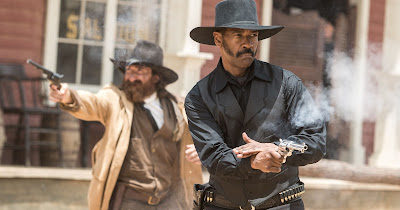 My problems with the movie really stem from its second act. The film starts out strong in putting the plot in motion and getting the Seven involved. But as soon as that was done, they needed to kill time before the final fight, and that's exactly what it felt like: killing time. The second act is very slow and kind of drudges on. Except for the actions sequence I was raving about above, there's not much to it, and I was just sitting in the theater waiting for the movie to get on to the next part. This second act needed something else in it to make it feel as important as the beginning and the end, as well as to be entertaining! Because I found myself drifting off at points. I also thought that Sarsgard's villain could have been more compelling. He had a strong introduction in the beginning of the film, and I found him entirely menacing. But the film doesn't further capitalize on it, and instead pushes Sarsgard to the sidelines in favor of giving screen time to the Seven. I understand why they did it that way, but I needed a few extra scenes just to make me hate the villain more, so that I could further root for the Seven against him. And I think that's an element they kind of dropped the ball with.

Overall, The Magnificent Seven is an engaging and entertaining thrill ride! It knows exactly what it is: a fun action movie. And it definitely delivers on the action. Antoine Fuqua does a masterful job in choreographing and shooting the action sequences, so that it doesn't depend on shaky cam and rapid editing. The performances are also all really good in the movie. Of course, Denzel Washington and Chris Pratt are great as the movie's main leads, but Byung-hun Lee absolutely steals it in terms of badassery. His character was the one I was most interested in. While the beginning and the end are all fun and exciting, the second act was really kind of dull and hard to get through (other than a short action sequence that was the best in the entire film). It really needed some extra momentum and energy. And Peter Sarsgard's villain started out strong, but became a very weak character by the end of the film. The movie needed to develop him a little bit more to make him more compelling. I can understand why they wanted to give more screen time to the Seven, but he needed just a few more scenes. But in the end, The Magnificent Seven isn't the best film of the year, nor did it live up to my incredibly high expectations, but it was a very enjoyable time in the theaters. 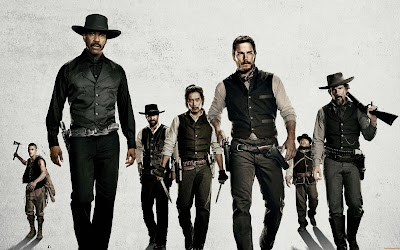 What do you think? Have you seen The Magnificent Seven yet? Did you like the film? Leave your (spoiler-free) thoughts in the comments section below.