Robert Zemeckis is a director who I never really hear in the list of all time directors, but should absolutely be there. Look at his track record: The Back to the Future Trilogy, Cast Away, Who Framed Roger Rabbit, Flight, Forest Gump... and that's just to name a few! He is immensely talented. Sure he's given us a couple duds, but overall, Zemeckis is a world-class talent. Last year he put out The Walk, which I really wanted to see, but I never got the chance to. I'm not going to make the same mistake twice this year with Allied. The film stars Brad Pitt and Marion Cotillard during World War II. Right there you've already hooked me. I don't need to know anything else. But, if a new trailer drops, I'm going to check it out.

I really liked this trailer. It opens to a very surprising Kingsman: The Secret Service-kind of feel, with Pitt and Cotillard just shooting up a Nazi hate rally. That is going to be a fantastic sequence to see in theaters. But then the central conflict is revealed: American intelligence believes Cotillard's character to actually be a German spy. Sure, this feels very much like another Brad Pitt film, Mr. and Mrs. Smith, but I think this can be done excellently. I liked Mr. and Mrs. Smith a lot, but it was a throwaway action film, whereas Allied has the potential to be something far more than that. This could end up being a serious Oscar contender, and that gets me really excited. Overall, the trailer was really good, but what mostly sells me on this film is the fact that Zemeckis directed it. 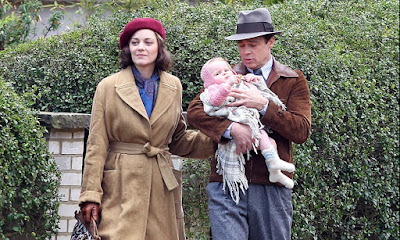 What do you think? Did you like the trailer for Allied? Are you looking forward to seeing the film? Leave your thoughts in the comments section below.