First Trailer for Pirates of the Caribbean: Dead Men Tell No Tales

Like most people, I've given up on the Pirates of the Caribbean franchise. I loved the first one, and thought the second was okay. I don't even remember the at all third, and I didn't see the fourth. I just don't care about this franchise anymore. But it makes a billion dollars every time a new movie comes out, so of course they're going to make more. It's the same thing with the Transformers franchise... who the hell keeps going out to see these that it continuously makes a billion dollars per movie? It makes no sense to me. I know zero people who like either franchise, so who keeps seeing these films? Well, since they keep making money, of course we're getting a fifth film, which is titled Pirates of the Caribbean: Dead Men Tell No Tales. I just want this movie to come out and be done with it, because that's a long-ass title that I don't want to have to continuously type out. We now have our first teaser trailer for the film and, regardless of my anticipation for the film, I'm going to look at it fairly and objectively.

I didn't hate this teaser. I actually liked it. Stylistically, it hearkened back to the original film, which I appreciated. The opening scene of the ship being overtaken looked really cool. And then we got our first look at Javier Bardem as the villain. I don't hate the design, but I don't love it either. The idea of him and his men being ghosts with partial body parts sounds cool, but the CGI was kind of distracting on screen. Plus it limits Bardem as an actor. Prosthetics would have been better, at least from a technical standpoint. But I will admit he looks creepy as hell. But I have to say, not putting Johnny Depp's Jack Sparrow in the trailer (other than his face on the Wanted poster) was a ballsy move. It kind of showed, to me at least, that this isn't just another sequel banking on Depp's appearance. It's trying to be its own movie and stand its own ground. I could be totally misinterpreting Depp's absence in this trailer, but that's what it says to me. And that shows that maybe Dead Men Tell No Tales could actually be the first good Pirates movie since the first one. 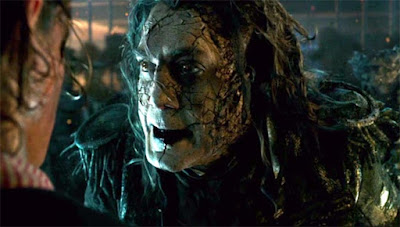 What do you think? Did you like the trailer for Pirates of the Caribbean: Dead Men Tell No Tales? Are you looking forward to seeing the film? Leave your thoughts in the comments section below.