Natalie Portman is a tricky actress. Sometimes he just kind of mails it in, but other times, when she wants to bring it, she tears the roof down! Consistency may not be her greatest strength, but she is still a tremendous talent, and you have to give her the benefit of the doubt anytime she joins a project. Since Jackie was announced, you knew this was going to be one where Portman gave a damn. The film centers on Jackie Kennedy, right after the assassination of President John F. Kennedy in 1963. I've been interested in seeing a trailer for awhile now. This had Academy Awards written all over, just from the still images I saw. So I was excited to finally check out the trailer for this probable Oscar contender.

I wasn't wrong: Portman is clearly looking to dominate. If she doesn't take home the statue, then in we're in for a great year for performances. The film has a very vintage feel, and it looks like a product of the 1960s. Whether that style will enhance the movie or just put the audience to sleep is still up in the air, but I think it worked visually for the trailer. I think this is going to end up being one of those films where the movie itself is alright, but the performance is so good that everyone ends up raving about it. I'm not sure if we're going to be walking out of Jackie raving about how good the story was, or how incredible the score is. I think the dominating dialogue will be Portman's performance. I hope I'm wrong and we end up getting a great movie alongside a phenomenal performance, but I'm just not positive on that. We'll have to wait and see. 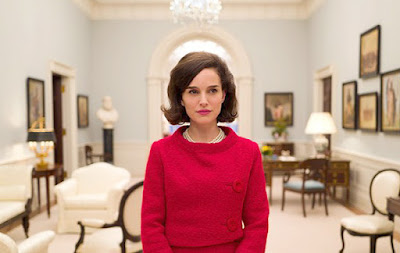 What do you think? Did you like the trailer for Jackie? Are you looking forward to seeing the film? Leave your thoughts in the comments section below.