Rogue One: A Star Wars Story has to be everyone's most anticipated film for the rest of the year. It's funny, anytime anything Star Wars pops up, people go nuts. And with good reason. Last year, Star Wars Episode VII: The Force Awakens was not only a fantastic movie and crushed it at the box office, but it held nerds by the balls for two years in excitement. It's easy to forget the level of tangible excitement that was in the air for all of 2015, waiting for that movie to come out. I remember that I couldn't get tickets to see The Force Awakens until Sunday of that weekend, so I stayed off of social media entirely for that whole weekend, afraid someone would spoil it for me! And while we haven't had that level of anticipation for Rogue One, people are still undoubtedly excited. With it getting closer and closer to its December release date, we've known that another trailer was bound to come soon. And now, we finally have our third (and probably final) trailer.

I think I feel exactly the same about this trailer that I did about the second one. It has a lot of really cool shots and good moments, but I didn't have the same visceral reaction to it that I had with the first trailer. That first teaser gave me goosebumps. I was jumping in my seat and geeking out. The screeching sound in the background, playing into the music. The sweeping shot panning up to the AT-AT. It was such an incredible trailer. With the second trailer, I liked it a lot, but not nearly as much as the first. And I feel the same way about this one. It works in that it gives us more of the story. We figure out how certain characters play into the narrative. We now know why the Rebellion enlists Jyn (Felicity Jones), because her father (Mads Mikkelsen) is the one designing and building the Death Star. We see more of Saw Gerrera (Forest Whitaker), and a much more substantial look at the film's (main) villain, Director Krennic (Ben Mendelsohn). And we do get a very brief glimpse of Darth Vader. This is where they dropped the ball, in my opinion. They need a much greater look at him to distinguish for fans that this is a prequel story, not a continuation of The Force Awakens. We needed a scene of Darth Vader, either him using his lightsaber or talking. But we only get a blink-and-you'll-miss-it shot. While this is a fine trailer, I don't think it's the best they could've put out as their final trailer. 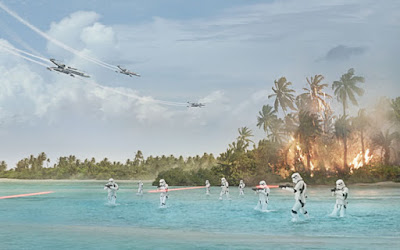 What do you think? Do you like the trailer for Rogue One: A Star Wars Story? Are you looking forward to seeing the film? Leave your thoughts in the comments section below.