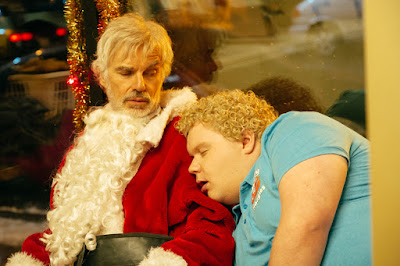 I was really looking forward to seeing Bad Santa 2. I had seen the first one, and while I didn't love it, I thought there was a great opportunity to improve with a sequel. You can read our In Preparation For review for Bad Santa here. I also laughed throughout all the trailers for this sequel. So I went in hoping for the best. However, not a lot of comedy sequels are on part with the original, let alone better. Especially ones with large time gaps. Just look at Zoolander. So there was a lot standing in the way of Bad Santa 2 actually being good. And it's 22% on Rotten Tomatoes sure didn't help. But I went in hoping that it would be decent enough, with a lot of good laughs, and I wasn't disappointed. Bad Santa 2 is essentially the same movie as the original, but with more consistent laughs and added supporting characters that make it, for me, a more entertaining movie than the original Bad Santa.

Thirteen years after the events of the first one, Willie (Billy Bob Thornton) is still the same old depressed drunk he was before. But when Marcus (Tony Cox) and his mother (Kathy Bates) come to him with a job too big to refuse, Willie gets back into the safe-cracking game, all while juggling the now adult Thurman Merman (Brett Kelly). 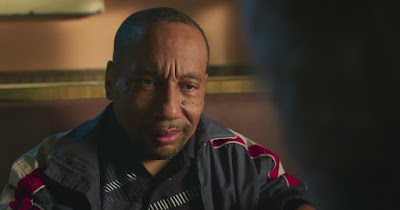 One of my problems with the first one was that I thought that it had good laughs, but they were spaced out. It wasn't consistently funny. With Bad Santa 2, however, I thought that it was consistent. I was laughing throughout the entire movie. Billy Bob Thornton was great again. As with the last film, I didn't think he was the standout of the movie, but I thought he did a very good job in leading it. And the supporting cast was great. Tony Cox was about the same as last time. Sometimes he was hysterical, and sometimes he fell flat. Brett Kelly was fantastic, however. I loved him in the first one, but I thought he was even better this time around. They had a lot to play with with him being all grown up now, and I thought Kelly did a great job with his performance. But Kathy Bates was the best addition to the film. She was consistently funny and raunchy, and was just fantastic. She had great chemistry on screen with Thornton. I actually believed her as his mother, after they explain the age difference between them later on in the film.

This is not a good movie. It just isn't. The story is paper thin, and it relies entirely on jokes and gags to carry the film. But for something like Bad Santa 2, that's not a bad thing because the jokes were really strong. I wasn't going in expected an Oscar worthy screenplay. I just wanted to be entertained for 90 minutes, and that's what I got. It borrows a lot from the first film, and is essentially a remake. It changes up the locations and some events, but the overall formula is the same, and it didn't necessarily bother me. I was just along for the ride. However, the cursing does get worn out after awhile. Halfway through the film you get tired of them saying "f*ck" or "sh*t" every other word, because it's no longer contributing to any of the humor; it's just there. They could've toned that down a bit, because it was no longer adding anything. The love interest in this film, played by Christina Hendricks, fell into the same problematic trap as with the first movie. She is a one-note character who's only purpose is to have sex with Thornton, and serves no purpose outside of that. I was hoping with this sequel that they could fix that mistake from the first movie, but it seems like they decided to go with it again. 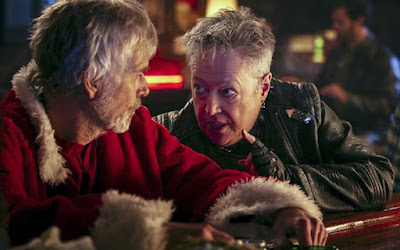 Overall, Bad Santa 2 isn't an all-time classic comedy. It's not a good movie. But for what it is, 90 minutes of raunchy humor, it worked for me. I wasn't the biggest fan of the first one, so I found this one to be an improvement. Others who are bigger fans of Bad Santa probably won't agree with me on that front, however. It's essentially the same movie as the first, but with more consistent humor and with great supporting characters. Brett Kelly tops his performance as Thurman Merman from the first film with this one. With the character being older now, there are a lot more jokes to make. The addition of Kathy Bates was also genius, as she adds a lot comedically for the film. Again, the love interest was completely one-note and added nothing to the movie. I was hoping they could give her a more dynamic role, but they didn't. And, like with the first movie, the plot is paper thin and not overly developed. But I took Bad Santa 2 for what it was and just enjoyed it as a mindless comedy that I'll forget about in a couple months. If you like the first one, definitely check this one out. I think it's worth it. And I would be very interesting in seeing a third installment later down the line. 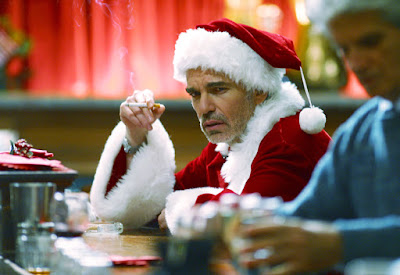 What do you think? Have you seen Bad Santa 2? Did you like the film? Leave your (spoiler-free) thoughts in the comments section below.