When the first trailer for Collateral Beauty dropped a few months ago, I was completely taken back by it. I hadn't even heard of the movie before, and suddenly I was hit with this emotional, riveting and powerful trailer. Will Smith was honestly robbed of an Academy Awards nomination last year for Concussion, which he was brilliant in. So when I saw the first trailer for Collateral Beauty, my immediate thought was Oscars all around. It looked like a captivating and emotional story, with a great character study into the mind of a mourning Smith. I got goosebumps watching that trailer, and it put my anticipation of the film from non-existent to through the roof! So when I saw that another trailer had dropped for this film, I was excited to check it out. I didn't need another trailer, because I was already sold, but I was interested to see if it would change my mind. Maybe I was just caught off guard that day, and the trailer wasn't as good as I thought it was. So I watched this trailer with an incredible amount of interest, not sure exactly what to expect.

I definitely liked the first trailer better, but this was a very solid trailer. At first, I wasn't nearly as captivated as I had been by the first trailer. I was still interested, but I wasn't quite locked in. But as the trailer progressed and we saw more and more unfold, I was right back where I was with the first trailer-- on the edge of my seat! The turning point in the trailer is really the scene between Smith and Keira Knightley, which looks like it will be a brilliant scene in of itself. I think this movie is going to be fantastic, and I think we are going to get some powerhouse performances from this film. Will Smith looks like he has a serious shot at a Best Lead Actor nomination, and some of the other supporting cast could get nominations as well. Plus, there's always potential for Best Picture or Best Screenplay. But I'm jumping way ahead of myself here. It's a great trailer. Not as good as the first, but it works. I just really can't wait to see this film. 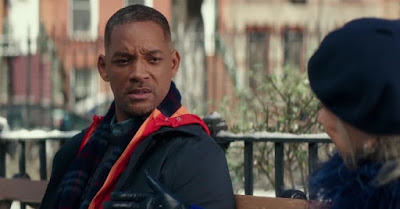