Fences is a movie I was really surprised by when I first saw the trailer for it. I had no expectations, and yet I was blown away by how raw the performances from Denzel Washington and Viola Davis were. The fact that Washington and Davis performed the play on stage before gave me confidence that they knew these characters inside and out, and that Washington was familiar with this world enough to effectively direct the picture. Overall, it looked like a compelling story, and it had the Academy Awards written all over it! So I've been really looking forward to seeing this movie, and I didn't think we necessarily needed another trailer. I saw all I wanted to see, and I was locked in. I didn't need to know nor wanted to know anything else about the film. However, the movie needed to put out more than one trailer to promote it, so we got a second trailer for Fences.

I didn't like it as much as the first trailer we got, but it was still very good. We see a different side of Washington's character. All we see in the first trailer is a very strict father, and with this one we see him more well-rounded. There are some rehashed moments, but for the most part it's mostly new footage. We also get a sense of some of the supporting cast, and how they'll play into the story. But mainly, what I took away from this trailer was that Washington's frustration with his son, seen more explicitly in the first trailer, isn't really about his son, but rather it's about his disappointment in himself. That was good to see, and it makes this overall story all the more complex. Like I said before, I didn't need to see this trailer, but I am kind of glad I did because it gave me some broader context and a more thorough understanding of the story, without giving too much away. This is quickly rising as one of my most anticipated films of the remaining year, and I can't wait to see it! 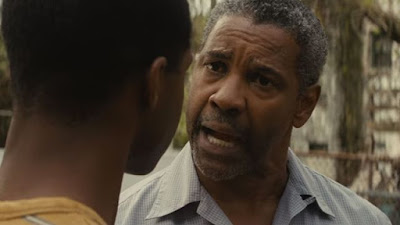 What do you think? Did you like the new trailer for Fences? Are you looking forward to seeing the film? Leave your thoughts in the comments section below.