For a major blockbuster film coming out in March, we don't know that much about Kong: Skull Island. We got a first trailer during San Diego Comic Con this summer, which was fantastic. You can see that trailer here. And then things were quiet for a while, until last week when our first look at King Kong himself dropped online. You can see that image here. But with the film coming out in just a couple months, it's surprising that we haven't gotten more. Skull Island is an important film in the shared Godzilla/King Kong universe, as it's our re-introduction to the King of the Apes. Godzilla got a mixed reaction from fans, so a lot rides on Skull Island to hit it home and really give us a reason to be excited for the upcoming films. If Skull Island comes out and it's mediocre like Godzilla, then a lot of momentum for the subsequent movies in this shared universe is going to stop. But I don't think it's going to be bad. I think Skull Island is going to be quite good. However, I was looking forward to seeing a second trailer in order to get a better sense of the film, and now we have that trailer.

I liked the trailer for its spectacle and big moments, but I do like the first one better. The first trailer very much adopted a horror movie feel, hyping the suspense, and delving into the philosophical differences between Samuel L. Jackson and John Goodman. It was a very adult trailer, and a lot more subtle. With this trailer, however, they try to add a lot more levity with John C. Reilly's character. I forgot he was in the film, so it made me smile when he popped up. But while I appreciate them trying to add levity to the movie, Reilly's humor felt really forced and unnatural. It felt like they re-shot it and added it into the movie after. I'm hoping in the context of the film it works a lot more, but it feels like the studio was afraid that people would think this movie was too dark and gritty, and decided to give us a slapstick comedy trailer to assure people there are some moments of fun, and it just didn't work for me. But other than that, I really bought into it. We saw a lot more of Kong, and he looks fantastic! The other monsters and the design of the island looks incredible as well. My one concern is that I wonder if Kong is too big to have personal relationships with the human characters, but they need him to be that big to fight Godzilla. So while the comedy in the trailer felt forced, I loved the spectacle shots and all the creature designs. We'll just have to wait and see how it all comes together. 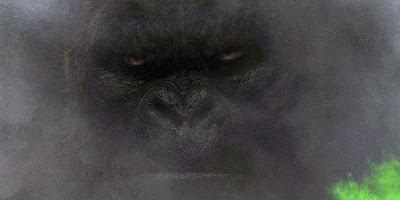 What do you think? Did you like the trailer for Kong: Skull Island? Are you looking forward to seeing the film? Leave your thoughts in the comments section below.