La La Land is a movie that I have been looking forward to seeing for months now. It's written and directed by Damien Chazelle, who made my favorite movie of 2014 in Whiplash. What he did with that film, in terms of its slick script and razor-focused directing, was remarkable, and just his involvement alone instantly boosted La La Land into one of my most anticipated of the season. Add the fact that it stars Ryan Gosling and Emma Stone, two of the best in the business right now, and you've got yourself a winning formula. Critics have been raving non-stop about this movie forever, claiming it to be one of the best of the year. So I've had all of this in the back of my mind for a while now. When I saw the first trailer, I was ultimately disappointed. It gave us practically nothing, and I wanted to know about the story and the characters, which we didn't get. I was already sold on the film because of the talent behind it and its critical acclaim: I wanted to buy into the narrative. So I have been patiently waiting for another trailer that knock me off my feet and get me pumped even more for this film, and now we have our second trailer for La La Land.

I liked it, but I didn't love it. It should be known that I am not a huge fan of musicals. There are some that I really like, most recently with Les Miserables, but I don't get excited for the genre as a whole. But seeing what Chazelle did with music in Whiplash and how he incorporated it so fluidly and organically into the story, I've been excited to see what he would do with a full-blown musical. This trailer didn't sell me on it being a musical, but it has made me more excited to see the film than I was before. Gosling and Stone look phenomenal together, and I think their chemistry is going to be a shining part of the film. I also had no idea that J.K. Simmons was in the movie, and I actually yelled out in excitement when I saw him. Even if he has just a cameo, he's instantly become one of my most anticipated parts of this film. Overall, it's a nice trailer. The acting looks great. The set design and art direction is brilliant. The choreography looks good. It didn't take my breath away and show me why I should be losing my mind for a musical, but it reaffirmed a lot of the reasons why I was initially excited for this film: the talent behind it. I am very much looking forward to seeing La La Land, and I hope it goes down as a musical I actually loved. 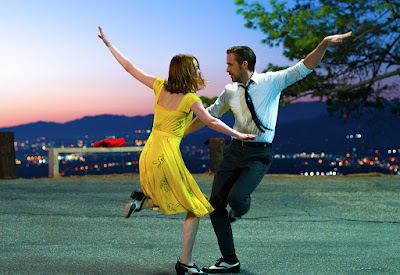 What do you think? Did you like the trailer for La La Land? Are you looking forward to seeing the film? Leave your thoughts in the comments section below.