I've never really been a big Power Rangers fan. I never got into the TV show, and I certainly never watched the movies that were released. So when I heard that a new Power Rangers movie was coming out, I couldn't give less of a sh*t. The first trailer hit, and I lot of people, including many friends of mine, went crazy for it. I thought it was fine. It didn't do anything to make me excited. The only positive thing I'll say about that trailer was that it didn't completely suck. It wasn't a trailer where I rolled my eyes watching, but it wasn't anything that got me excited for the movie. The question lingered, however, whether this new Power Rangers movie could actually be any good. Maybe I let my friends who loved the trailer sway me, but I was starting to think that this movie might turn out to be something not that bad. So when I heard a new trailer for the film was coming, I was mildly excited for it. I wanted to see if that was just a decent trailer, or if this movie could actually turn out to be something that's not as atrocious as I thought it was originally going to be.

This second trailer turns the movie, as I described on Twitter, into a "giant CGI fart cloud". It loses the personal, dramatic touch that the first trailer tapped into, and settles for becoming a noisy piece of cliched, blockbuster nonsense. The humor didn't work for me. It played far more towards the kids, which is completely opposite to what fans of the first trailer loved. They raved about how it seemed far more dark and serious, and then this trailer undid all of that. Bryan Cranston looked a little ridiculous at Zordon, but then Bill Hader as Alpha 5 showed up and the whole f*cking trailer went to sh*t! That's when I officially checked out. Once we got to Elizabeth Banks as the villain and all the giant destruction sh*t, I didn't care at that point. It just looked like a CGI mess-- like Independence Day: Resurgence or something. Any kind of mild anticipation I had for this film is now gone, because I think this trailer revealed the movie's true nature. It's going to be a loud, dumb, CGI-filled waste of film just trying to sell toys. I think the first trailer was simply misleading in letting people think this will be any different. This may seem very cynical, but it's how I feel. I really don't think Power Rangers will have anything of value for someone older than ten. Maybe for some very hardcore fans, but that's about it. When the characters, in all seriousness, are actually saying the phrase "It's morphin' time", that's when you know you don't have a legitimate movie. 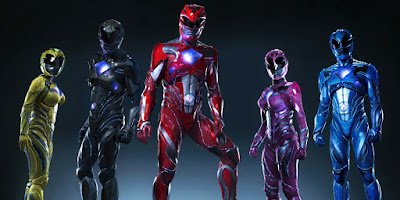 What do you think? Did you like the second trailer for Power Rangers? Are you looking forward to seeing the film? Leave your thoughts in the comments section below.