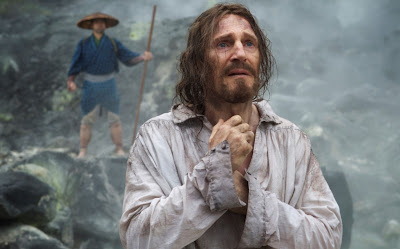 I've been on board with Silence ever since I heard the basic description of the movie. Anytime Martin Scorsese puts a film out, I'm interested. With movies like The Departed and The Wolf of Wall Street, he proved that he was still a great director, after all these years of making films. Plus with the inclusion of Spider-Man, Kylo Ren and Qui-Gon Jin, you knew we were in for something special here. After seeing Andrew Garfield's brilliant performance in Hacksaw Ridge, I was excited to see his other acclaimed film of 2016. There were talks that he could end up being nominated for two Best Lead Actor awards at the Oscars. While I highly doubted it would happen, it didn't hinder my anticipation to see another game-changing performance from Garfield. I was also excited to see what Adam Driver could do. We've really only seen him as Kylo Ren in Star Wars Episode VII: The Force Awakens, so I was looking forward to getting a better taste of his acting ability. So, needless to say, I was really excited to see Silence. Ultimately, I was disappointed. Silence has some excellent moments and great scenes, but doesn't work as a whole to make a compelling movie. 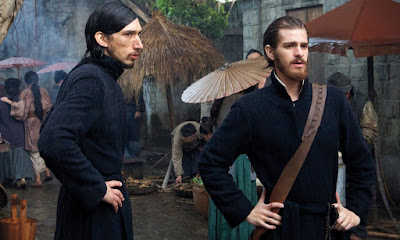 Regardless of its content, Silence is a beautiful film to watch. Like most Scorsese films, the cinematography is absolutely incredible. The use of visual imagery and breathtaking shots really commanded my attention. Scorsese re-teamed with his The Wolf of Wall Street DP, Rodrigo Prieto, for this film, and the two make magic with Silence. It utilizes the Japanese background to its fullest, making for some truly compelling shots. It was definitely the best part of this movie. The acting is also really good. Andrew Garfield is this film's lead, and while he was simply good at the beginning of the film, he really shows his ability as an actor later in the movie. I would say his performance in Hacksaw Ridge was better, but he had some excellent moments in this movie. Adam Driver was good in what we saw of him, but he wasn't involved a lot in the story, which was disappointing. Liam Neeson also had some fantastic scenes. There are some excellent moments in this movie that really show Scorsese's strengths as a director. There are a couple scenes in particular in the third act where Garfield's faith is truly tested where I was on the edge of my seat.

However, the movie in its entirety didn't have that same level of control over me. This is a really bloated movie. It's already two hours and forty one minutes, but it feels a lot longer than that. I know that this is Scorsese, but it didn't need to be as long as it was. It should've been shorter. But even still, a movie can be long and still work excellently. Look at films like The Lord of the Rings, or even Scorsese's own The Wolf of Wall Street. The long run time doesn't matter if the story is told in a compelling way. And, unfortunately, that doesn't happen with Silence. The film's actual plot is muddled. It's established to be Garfield and Driver's mission to find Liam Neeson, but that is immediately discarded in favor of them being missionaries to Japanese Christians in hiding. The movie takes some time to find its true story, which is Garfield's faith being tested. Like I said, this film is much too bloated, and needed to be far more concentrated. Had it been closer to two hours, with a much more concentrated story, this could have been really compelling and engaging. But Silence takes too long to figure out what it is, and, in the meantime, the audience checks out. 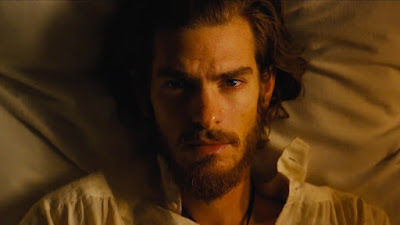 Originally, Silence was over four and a half hours, before the studio forced Scorsese to cut it down to under three hours. This is very apparent, especially in the beginning. The first twenty minutes, which establish Andrew Garfield, Adam Driver and Liam Neeson's characters and the entire plot of the film is incredibly choppy and haphazard. It's very evident that there was a lot more to this part of the film, but it was cut in order to reduce the runtime. So the first twenty minutes is very fast and cut in a way that leaves a lot of gaps. You don't really connect with the characters, because they're thrown into their mission before you even get to know them. After this period, the film drastically slows down. What Silence needed was a middle ground. It needed to be slow enough to efficiently tell its story, while being fast enough to keep the audience's interest. Scorsese has said that this film was a passion project of his. I'm not sure if he was just too excited to do it or what happened, but he made some very basic mistakes in this film that someone Martin Scorsese's caliber should not have been making.

Ultimately, Silence is a disappointment. While it delivers on the usually breathtaking Martin Scorsese cinematography, and the performances are very good for the most part, the story as a whole falls flat. The actual story of this movie is muddled, and buried in all this excess that doesn't need to be there. The fact that the story is not clear-cut or rather clear makes for a very slow endurance test. The movie is not nearly as compelling as it should be, and has very little momentum. By the time the story elements and thematic moments pay off, I had already checked out, and it didn't nearly have the impact that it should have had. Silence has some really great moments, with some outstanding scenes and ideas, but as a whole, it doesn't work to make a compelling film. In terms of Scorsese's greats, this ranks low in terms of the quality of the film and the execution on Scorsese's part. In the end, Silence is very much a let down for anyone expecting a great movie from Scorsese's latest. 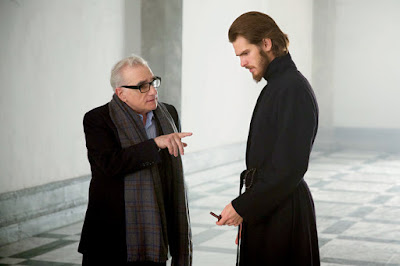 What do you think? Have you seen Silence? Did you like the film? Leave your (spoiler-free) thoughts in the comments section below.