Avengers: Infinity War- Behind the Scenes Featurette Gives Us Our First Look at Production

Avengers: Infinity War has been promised to us to be the biggest film Marvel has ever done. It will see every single Avenger (and the Guardians of the Galaxy!) teaming up to fight against Thanos (Josh Brolin). Thanos has been teased ever since the end of The Avengers, where he appeared in a post credits scenes. And now, in hindsight, everything since the first Iron Man movie has really built to this. By the time Infinity War hits theaters, it will have a decade's worth of set-up for the ultimate culmination. I don't think we could be any more excited for this movie. Infinity War is currently filming now, with everyone from Robert Downey Jr. to Chris Pratt on set filming the epic. Since the movie just began filming, it didn't seem likely that we would see anything from the movie for a long time. However, like many times before, Marvel has once again proven us all wrong.

Marvel has released a behind-the-scenes featurette that details some of the pre-production of the film, giving us concept art of Rocket Raccoon (Bradley Cooper) and Thor (Chris Hemsworth) teaming up (pictured below). We also get to see concept art of Thanos without his armor. This featurette was awesome to watch. It gave us such a small taste of what they're going for, but it was incredible to see. I was getting giddy seeing Robert Downey Jr., Tom Holland, and Chris Pratt all standing next to each other. I remember back when The Hobbit movies were filming, Peter Jackson would release production videos every few months, giving us ten minute featurettes about what they were filming. I really hope that's what they're doing here. I would love to see these featurettes every few weeks, giving us new and brief glimpses at what's to come. We all know that the Guardians and the Avengers will be in this movie, and yet we're losing our minds over seeing the concept art of Rocket and Thor! That's the power Marvel has over us nerds; it's easy to get us excited. I really hope they continue to do this, because it would be a great treat for the fans. 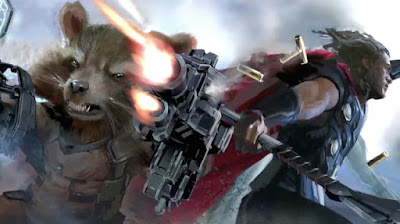 What do you think? Did you like the behind-the-scenes featurette? Do you want to see more? Are you looking forward to Avengers: Infinity War? Leave your thoughts in the comments section below.