I know this is blasphemy for many science fiction fans, but I was not a big fan of Ridley Scott's original Blade Runner. I don't know what it was, but it just didn't connect with me. I'm planning on watching it again in preparation for the sequel, so maybe my mind will change upon re-watching it. We'll see. But since I'm not the biggest fan of the original, I haven't been super on board with Blade Runner 2049. Sure, I love the talent behind it. Denis Villeneuve is a great director, and his involvement in it really excites me. The cast is also excellent, including Ryan Gosling, Jared Leto, Dave Bautista, and of course Harrison Ford. Those are all elements that are attracting me to the movie, but not entirely selling me on it. The first teaser trailer was really good. It showcased a lot of the beautiful cinematography, which definitely caught my eye. But, it was light on story, which was fine since it was a teaser trailer. But I've been wanting to see a more full-length trailer in order to really sell me on the story. Since I'm not as big of a fan of the original, I really need to be sold on why I should go see this one. So hopefully, with the release of this new trailer, it can do that for me.

While I don't think this was the best trailer of the year or anything like that, I found it to be serviceable enough. The visuals look gorgeous. Roger Deakins is the director of photography for this film, and it clearly shows. Every single shot is beautifully framed, with rich colors and brilliant angles. The production design is also immaculate. All the set pieces, the costumes, the props, it all looks fantastic. And the line between practical effects and CGI is blurred, which is all the better. For a trailer for a movie that is months and months away, usually the CGI is pretty noticeable, but nothing stood out as being bad to me in this trailer, which is definitely a good thing. So I think all the visual elements were spectacular. I still don't know what the story is. For some, that's a good thing. But for a person who didn't really like the first Blade Runner all that much, I need to be hooked and sold on the story for 2049. Sure, I like Ryan Gosling and Harrison Ford and Denis Villeneuve, and those are all elements drawing me to the movie, but I really want to connect with the story, so that I can get excited for going to see it. Right now, it looks like it's going to be a visual marvel. But what I want to know is the story. If I wanted to see a movie that looks beautiful but has a sh*t story, I'd go re-watch Ghost in the Shell. I want Blade Runner 2049 to be different than that. 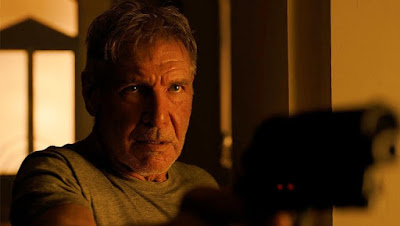 What do you think? Did you like the new trailer for Blade Runner 2049? Are you looking forward to seeing the film? Leave your thoughts in the comments section below.