First Trailer for The Dark Tower

It seems like people have been waiting for a trailer for the latest Stephen King book adaptation, The Dark Tower, forever now. Every other day it seems, all I can hear people asking is when we're going to get the trailer for the film. I didn't realize there was so much excitement for the movie. Sure, it's a Stephen King property, but I didn't know there was so much hype for it. I wasn't familiar with the property at all. I never read the book. I didn't even know the basic premise of it. I just knew it starred Idris Elba and Matthew McConaughey, and that was enough for me. But the movie does come out in August, and is about three months away. The fact that there wasn't even a trailer out at this point was a little concerning, but not entirely unprecedented. Then we finally learned the news that The Dark Tower trailer would be dropping this week. I didn't really have any expectations for the movie, so it didn't matter as much to me. But I was definitely going to check it out when it dropped, to see if this was going to be a property I would be interested. And now we have the trailer.

I actually really liked this trailer! It's a lot bigger of a movie than I thought it was going to be. I didn't realize it was going to be an apocalyptic, end-of-the-world kind of story. It does make more sense now why it's coming out in the summer. The action looks awesome. All the scenes involving Idris Elba were so badass. The way he was using the guns was completely kickass, and I think he'll absolutely steal the movie. We didn't see much of Matthew McConaughey, but the one shot involving Elba fighting him looked incredible. I just hope the kid (Tom Taylor) doesn't get annoying. Usually, when the kids are the vessel used to tell the larger story, they get incredibly annoying, and you just want to get them out of the way so you can focus on the actual, worthwhile story. I just hope that doesn't happen. The conflict between Elba and McConaughey looks intriguing, and I don't want it to be bogged down by a pointless storyline involving a kid. Overall, I thought this trailer was pretty cool. Considering I had no idea what the film was about, the trailer really caught my attention, and now I'm actually really looking forward to seeing the movie. 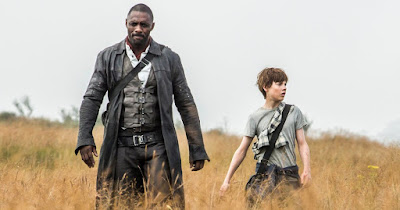 What do you think? Did you like the first trailer for The Dark Tower? Are you looking forward to seeing the film? Leave your thoughts in the comments section below.