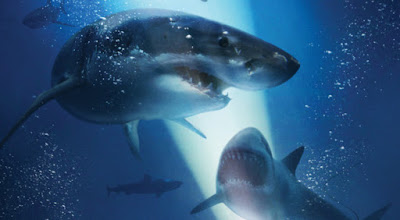 I like a good shark movie. Jaws really set the precedent. Not only did it have great action involving the shark, but it also had a great story and excellent characters. In reality, Jaws is a really good movie that just happens to have a shark in it. And where most other shark movies fail is that they have sharks in it, and that's about it. Last year's The Shallows broke the mold and was actually really good. The third act got a little bit ridiculous, but first two thirds of the movie was excellent. It had a great story, good character development, and built true and tangible suspense. So when I first saw the trailers for 47 Meters Down, I could immediately tell that it looked more like Sharknado rather than Jaws or The Shallows. I have to admit, I had no intention of seeing this movie. It looked like complete sh*t, and I still don't know why I ended up going to see it. It was a if-everyone-jumps-off-the-cliff-will-you-jump-too kind of scenario, and I sure as hell jumped. I jumped 47 meters down! And you know what's at the bottom? Complete sh*t. This movie is complete and utter trash, with terrible performances, atrocious dialogue, and barely any sharks in it! If you were excited to see some sharks, you'll be disappointed. If you thought this movie was going to be awful, then you'll be completely vindicated.

While on vacation, Lisa (Mandy Moore) and Kate (Claire Holt) go in a shark cage. Unexpectedly, the cable snaps, plummeting them 47 meters down into the depths of the ocean. 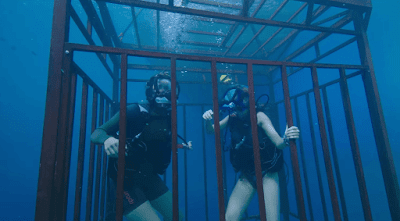 This trainwreck starts first and foremost with the screenplay. The writing is awful. Sure, the idea was kind of neat. But it was completely bastardized with all the other bullsh*t in the screenplay. The reasoning for why they even get into the cage in the first place is so lazy and contrived that I was immediately taken out of the movie. It was shoved down our throats in the worst way possible. The three act structure of this film is a mess. They attempt to do some sort of twist in the beginning of the third act, but it completely falls on its face and is rendered useless by the end of the movie. When the film actually ends, you realize there was no point for it to ever happen. This film has some of the worst dialogue of the year. This was originally supposed to be straight to home video, but then the distribution studio decided to give it a theatrical release... and it f*cking shows. It looks, sounds, and feels like a SyFy movie. Not quite as bad as something like Sharknado, but put this into perspective: Sharknado is made trying to be stupid. This movie actually took itself seriously, and it completely and utterly fails. You hit a trifecta in this film: terrible script, terrible dialogue, and terrible acting. The performances are so cringe-worthy. I think I squirmed more in my seat watching Mandy Moore and Claire Holt choking on their dialogue than I did at any of the stuff involving the actual sharks. And the sharks only have a cameo appearance in this. Most of the movie is the two girls curled up crying about the situation. It was all home video level quality, which is why it was such a turn-off that I spent $10.19 to sit and watch this on the big screen when there were plenty of other things I could have done to occupy my time.

The special effects are atrocious. They look a notch better than the SyFy channel. The green screen was incredibly obvious, and it never looked like the characters were actually in and around sharks. The poor CGI was so noticeable that I never believed for one second that any of this was actually happening. It just looked fake. There is also no real suspense in this movie. The film thinks that the way you build suspense is just by having orchestra music crescendo. There's nothing visually happening to gain suspense. It's just music building and building. There's no atmosphere or mood to reel you in. It's so contrived and forced that it just becomes senseless noise. I was bored out of my mind watching this movie. Now, I will say that I think Johannes Roberts is a decent director. I think he was handed an atrocious script, and did the best he could with it. Some of the visual elements of the movie did stand above the terribleness of the other parts. However, Roberts was also responsible for getting good performances from the actors, but failed miserably on that front. So I guess I'm not really praising him or anything. I just think he needs better agents, because he's shown promise in other movies, like Run All Night. But this was just an unmitigated disaster. 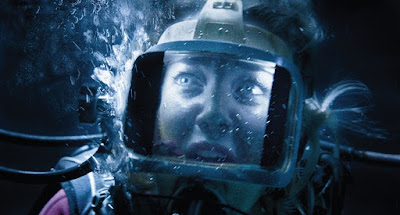 Overall, 47 Meters Down is complete trash. It's nonsensical bullsh*t that barely has any sharks! Trust me, there's not many in here. It hits the trifecta. It has a terrible screenplay, atrocious dialogue, and horrendous performances. All of these combined almost made my ears bleed. The CGI is also garbage, ruining any fun that could have been had with the sharks. It also completely disconnects any of the characters from the sharks, because the green screen and CGI is so obvious and stands out. I do think director Johannes Roberts has promise. He did the best he could with some of the visual elements, but it wasn't enough to make this movie tolerable or remotely entertaining. In the end, 47 Meters Down is a complete waste of time. Some may find some enjoyment in it, but I couldn't get past any of the gnawing elements that really made this unbearable, such as the story, dialogue, acting, special effects, character development, action. You know, those little things. This is so far the worst movie I've seen this year, and I hope that it stays that way. I really do not want to see another movie that's worse than this piece of garbage. 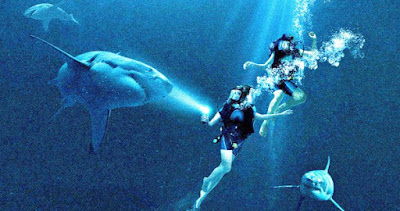 What do you think? Have you seen 47 Meters Down? Did you like the film? Leave your (spoiler-free) thoughts in the comments section below.