I think other than maybe Tom Holland as Spider-Man, Chadwick Boseman's Black Panther was the standout character in Captain America: Civil War. There was so much nuance and complexity brought to his character, and he was just an absolute badass overall. Ever since seeing him in his debut, I've been excited for his standalone film, due out next February. They've also assembled an insane cast. You have Boseman, Michael B. Jordan, Forest Whitaker, Martin Freeman, Andy Serkis, Lupita Nyong'o, Daniel Kaluuya, and Phylicia Rashad. Plus with Fruitvale Station and Creed director Ryan Coogler behind the camera, you have one incredible line-up. But with Spider-Man: Homecoming and Thor: Ragnarok hitting theaters this year, and constant news about the epic Avengers: Infinity War, I've all but forgotten about Black Panther. It's not terribly far away too, only about eight months. And we haven't heard much about it except for the cast. But now, seemingly out of nowhere, we have our first trailer for Black Panther.

This trailer was a complete surprise, but I really enjoyed it. Boseman looks great once again as T'Challa. I think he is going to crush it. I was surprised with how much time Andy Serkis got in this trailer. Maybe they're trying to capitalize on the release of his new movie, War for the Planet of the Apes, next month. Who knows? But I didn't think he would have a huge role in the movie, so to see him in such a big portion of the trailer was surprising. It was good to see him though, especially opposite Martin Freeman. And the idea of Wakanda secretly being this technological utopia was fascinating, and a great way to reinvent the comic book mythology. All the costume and production design looked gorgeous! It was very colorful, reminiscent of the Thor: Ragnarok trailer. But it certainly works, and I think it is going to bring a new element to the Marvel Cinematic Universe. The shot at the very end did look a lot like a video game, but I can forgive this movie for not having their CGI perfected. It is still eight months away, so of course it's not going to look like that in the final film. Overall, I really enjoyed this trailer, and I am even more excited to see Black Panther next year. 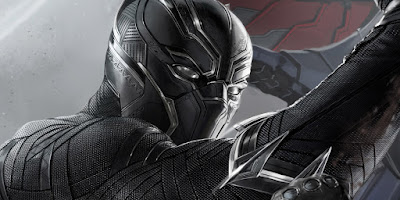 What do you think? Did you like the first trailer for Black Panther? Are you looking forward to seeing the film? Leave your thoughts in the comments section below.