I never saw the first Daddy's Home in theaters, but I did catch it on a plane flying home from Puerto Rico. I don't think Puerto Rico really has anything to do with this, but it is a part of the story nonetheless. I actually quite enjoyed the movie. It's not a great comedy by any stretch of the imagination. There's a lot of really stupid humor in it. But I had fun with it, and enjoyed it. There were some good laughs in there, mixed with some good heart. It was really more of an expendable comedy than anything else, but it certainly better than what the trailers made it out to be. I didn't think the trailers were all that good, but it turned out to actually be pretty decent in the end. I wasn't necessarily clamoring for a sequel, but I was interested in potentially seeing it. Especially after they announced Mel Gibson and John Lithgow would be joining to play Mark Wahlberg and Will Ferrell's fathers, respectively. I thought there was a lot of potential there, and it definitely increased my interest. And, with the movie hitting in November, we now have our first trailer for the sequel comedy.

I have to admit, I did laugh during this trailer. Not substantially, but it got a few chuckles from me. One of the things that sold me on the first movie was the chemistry between Ferrell and Wahlberg, and it was immediately apparent that they recaptured that in this one. The introduction of Gibson and Lithgow was also well done. They definitely fit into this movie, and they seem like they will be the perfect vessel to inject new and fresh comedy into this film, so that it doesn't just feel like a retread of the last one. Lithgow had me cracking up. He looks to be perfect for this movie, and was absolutely hysterical! I don't think this will happen, but there's a chance that having Ferrell and Lithgow both playing the eccentric character will get annoying. But I don't think that's going to end up happening. Sequels to comedies aren't always the best. They don't usually work. But I think this has the potential to be just as good as the first one (which isn't a super high bar). It could fall completely flat, but I think Daddy's Home 2 could be simply a serviceable and expendable, yet fun-natured comedy in the exact same fashion as the first one. 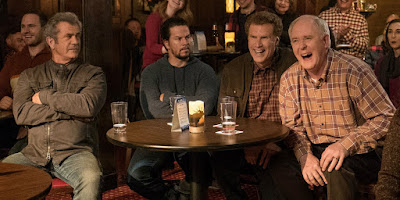 What do you think? Did you like the first trailer for Daddy's Home 2? Are you looking forward to seeing the film? Leave your thoughts in the comments section below.