With the DC panel at San Diego Comic Con this year, it was all but confirmed that we would be getting a new trailer for Justice League. It just made sense; the movie is DC's next upcoming release, and with the success of Wonder Woman, Comic Con was the perfect time to continue marketing the movie. We've had a bit of a lull with Justice League marketing, after Zack Snyder had to step down from directing due to a family tragedy, and Joss Whedon was brought on to oversee reshoots and post production. Since then, things have been kind of quiet on the Justice League front, and rightfully so. This is an incredibly hard and sad situation, and everyone needed some time to heal and process it. So after a couple of months of keeping information on the down low, Comic Con presented itself as the perfect opportunity for DC to kick things back into gear with Justice League and, sure enough, they took full advantage of the opportunity.

While this is a very good trailer, it is not my favorite Justice League trailer we've seen so far. I still reserve that for the last trailer we got a few months back. What became abundantly clear from watching this new trailer is that this is still by far a Zack Snyder film, just with some Joss Whedon influences. Some people thought, with Snyder stepping away to deal with the death of his daughter, that DC would use this tragedy as an opportunity to replace him with Whedon in order to make it through and through a Joss Whedon movie. Not only is that impractical, but it's completely unethical. I never thought that was the motivation behind Whedon coming aboard the finish the movie. Whedon was always meant to simply be there to help the movie across the finish line, and this trailer confirms it. The style and feel of the trailer is all Snyder-esque. You watch it, and you see how it fits in with the tones of his other DC films, Man of Steel and Batman v. Superman: Dawn of Justice. But then there are moments that feel like they have been influenced by Whedon's style of filmmaking. This trailer is, I think, an accurate representation of what the movie will be like: a Zack Snyder film, with Joss Whedon influences. In terms of what's actually in the trailer, it's a lot of the same kinds of things we've seen in the other trailers. A lot of cool, slo-mo action shots, with very little focus on the story. This is making me nervous, because what made Batman v. Superman fail for me was the under cooked story. So I hope Justice League doesn't fall into the same trap. Overall, I don't know yet whether Justice League will end up being good. I certainly hope it will. But I have a feeling it'll be more style over substance, which has always been Snyder's problem. But hopefully I'm wrong. 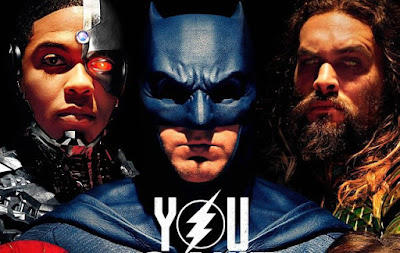 What do you think? Did you like the new trailer for Justice League? Are you looking forward to seeing the film? Were you happy with San Diego Comic Con this year? Leave your thoughts in the comments section below.